Due to its immense popularity, Antony Gormley’s Critical Mass, on the rooftop of the De La Warr Pavilion, will be extended a further month and will now remain open until 26th September

Critical Mass, one of Gormley’s best known works, is an installation made up of 60 lifesize cast iron body forms which is on display on the roof of the De La Warr Pavilion.

The artist comments: “This is the return of the lost subject to the site of Modernism. It is great to have a chance to test this piece of sculpture against the clarity of Mendelsohn and Chemayeff’s English masterpiece. I am excited to see these dark forms in the elements against the sea and in direct light. It will be like a sky burial. How these masses act in space is very important. The challenge is to make the distance intimate, internal.”
Critical Mass is made up of five casts from 12 discrete moulds of Gormley’s body, developing from a low crouching position to squatting, sitting, kneeling and standing – an ascent of man ranging through the complex syntax of the body. 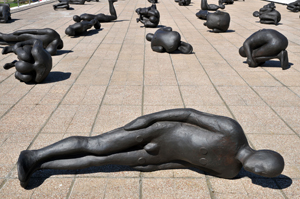 The term Critical Mass comes from nuclear physics and is the necessary density within a radioactive isotope for fission to take place. When applied to social issues, Critical Mass usually means the necessary level of density within a collective that allows for something transformative to happen. In this case, the bodies appear to have fallen from their normal context. The first impression is of some kind of trauma, perhaps an act of
violence perpetrated towards the masses such as terrorism or genocide (the work was originally made for a huge railway terminus in Austria, thus consciously connecting it to the victims of the Jewish holocaust). There is also reference to the fact that most of us in the western world co-exist within carefully constructed urban matrices where the spaces
between us are as significant as the walls that contain us. 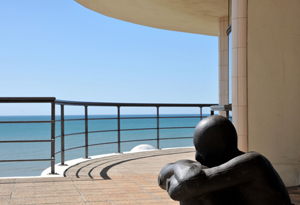 The individual body forms will evoke contradictory readings and emotions from the viewer depending upon which way they are orientated. Cast from the outside of a plaster mould, all the imperfections of the mould surface are reproduced on the finished work, as are the signs of the loose pieces in the sand mould, the flash lines that exist between
them, and the out-runners of the metal-pouring which are integrated into the surface. 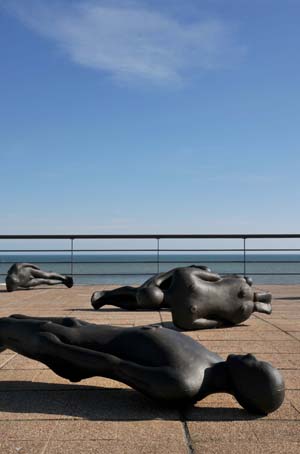 The solidity and weight of each piece is an active feature of the work; the density of each is ten times that of a human body of the same size, giving it a stability that its random orientation might not suggest.

The De La Warr Pavilion is a Grade One listed building, designed by Erich Mendelsohn and Serge Chermayeff and opened in 1935 as the first public building built in the Modernist style in the UK. Constructed with steel and concrete, it posed a new and exciting challenge for its structural engineers F J Samuely and Partners who built their reputation on their association with the Pavilion. Samuely’s have advised the Pavilion on
the positioning of Critical Mass to ensure that the weight of the sculptures do not compromise the structure or materials of the roof space.
The works will be installed during the week beginning 4th May using cranes and mechanical machinery.

The result will be a unique installation – the first ever seen on the
De La Warr Pavilion roof space.
Further information on Antony Gormley and his work: http://www.antonygormley.com

Time lapse video of the installation by Nick Pilton