FREE! Daytime and evening art, music and performance. A real treat this month as Dear Serge also coincides with the opening of the new exhibitions by Alison Turnbull and Matt Calderwood

You can view videos of past Dear Serge acts at dlwp.tv 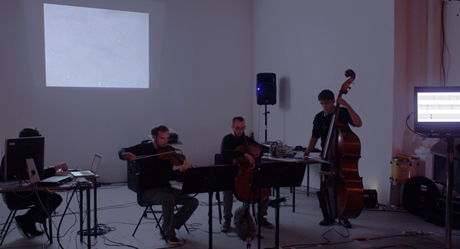 For this electro-acoustic realization of Dust Music, live electronic reverb and feedback is added as a fourth musical element. Freely improvised, it reflects on and interacts with its three notated acoustic counterparts, in a revolving dialogue of reaction and interaction between the performers.

Dust Music lasts twenty-one minutes. It features the video source, the animated notation, and live performance so that the relationship between all of the material is present for the audience.

Using a banjo, Kieran engages the audience in his world; a passion for African American and European musical styles amalgamating in Appalachia in the 1700’s. He attempts to do what a banjo player would do in its original mountain environment. Through constantly retuning the banjo, an atmosphere is created where the banjo is in control.

Music for the end of this world and the beginning of the next.

A non-durational audio-visual environment, with no clear beginning, end, or in the traditional sense, progression, but rather relies on the listener’s focus of attention.

The aesthetic characteristics of the work are based on aspects of Zen philosophy, and it’s emphasis and appreciation of the natural process.

Based on the instruments’ unusual flexibility to manipulate the pitch and timbre of each played note, the music is slow and drawn, with a strong emphasis on the subtlety of change.

Jockel Liess is a London based audiovisual artist and composer. He graduated from an MMus in Studio Composition at Goldsmiths University of London in 2012 and an BA(hons) in Fine Art from Byam Shaw School of Art in 2000.

Great DJ set by talented DJ duo. They will play some incredible tracks

Bela’s solo performances are the stuff of legend: intense and exhilarating. Her command of her instrument and ability to attune to the uniqueness of the moment combine to produce music which is remarkably different and frequently spellbinding. For this performance Bela will perform a new and original piece in her usual unique improvised manner.

Bela Emerson plays cello and tenor guitar and processes them through guitar pedals. She performs, records and tours solo and in collaboration with filmmakers, acrobats, dancers, actors and innumerable other musicians, has performed residencies at Sydney Opera House and Royal Festival Hall, as well as being recently commissioned by BBC Radio 3’s Late Junction for solo live broadcast from Latitude Festival.

Mathew Sawyer is an artist and musician who creates objects, paintings, actions and events that oscillate between the public and private, the troublingly personal and the unsettlingly familiar.

For this performance Mathew will play acoustic guitar and sing, accompanied by viola player Alison Cotton.

Great DJ set by talented DJ duo. They will play some incredible tracks