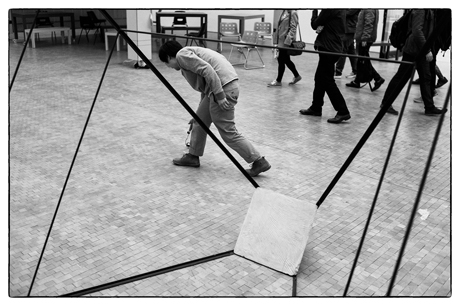 All welcome, free parking on seafront and bar/cafe open.

It’s been more than 10 years since this pair issued their last collaboration of weighted, throbbing stasis ‘My Days Are Darker Than Your Nights’ on Berthling’s Häpna label. In that time, both musicians have created a massive body of work that stretches from krautrock ecstatics and rocketing noise (notably together when Oren joined FIRE!) to the most subtle, liminal tone float. Armed with guitars, electronics, drums and hammond organ and performing through the monster PA of DLWP’s main auditorium this duo return promises to scale all kinds of auditory heights.

Oren Ambarchi is a guitarist and drummer from Australia who has performed and recorded with a diverse array of artists such as Fennesz, Charlemagne Palestine, Thomas Brinkmann, Keiji Haino, John Zorn, Merzbow, Jim O’Rourke, Keith Rowe, Phill Niblock, John Tilbury, Evan Parker, Fire! and many more. Since 2004 Ambarchi has worked with American avant metal outfit Sunn 0))) contributing to many of their releases including their Black One album from 2005 and their acclaimed Monoliths & Dimensions release. Ambarchi has released numerous recordings for labels such as Touch, Southern Lord, Editions Mego, Kranky and Tzadik. His latest solo releases are Audience Of One and Sagittarian Domain, which was voted #1 in Spin magazine’s Best Avant albums of 2012.

Johan Berthling is one of the founding members of Swedish trio TAPE, the bass player for the trio Fire! with Mats Gustafsson & Andreas Werliin and is involved with many other projects ranging from free jazz to rock. His collaborators include Mats Gustafsson, Akira Sakata, Paal Nilssen-Love and many others.

From subterranea, sweat, haze and dedication emerging out of intimate and intense weekly meetings begun in 2009 – their first, 2012 public performance, squeezed into a London basement was a sheer, vexed and exhilarating smack of organic, heterodyning ideas, and taut, lowbeating lumps.

The ingredients are familiar, but the listening is not.

At its heart is a still, undecorated concentration fuelling an extreme testing of limbs, language and order. This has no concern with collapsing difference into a vogueish flattened mass froth, but searches – forensically, ceaselessly – for something to chew, in the challenge of discretion and integrity or asylum in the body of its instruments.

Finding, twisting and hammering out an expanding musical universe balanced only by its own logics – lll人 have few obvious comparisons. Their performances are consistent radical negotiations of the emotional, physical and social energies of the environments they sound out.

Rie Nakajima is an artist working with installations and performances that produce sound. Her works are most often composed in direct response to unique architectural spaces using a combination of audio materials and found objects.

The works created for the purposes of “playing” the sounds she has in mind are often placed matter-of-factly on the floor or take the form of assembled objects that serve as sound makers, giving rise to inorganic spaces. Listening to the works in such finely honed environments brings to the surface in a pure way people’s imagination, memories, and deepest thoughts. Nakajima graduated from the Department of Aesthetics and Art History at Tokyo National University of Fine Arts and Music and received a BA in Sculpture at the Chelsea College of Art and Design and an MA in Sculpture at the Slade School of Fine Art, London. Since then Nakajima has exhibited and performed widely both in the UK and overseas. In early 2014 Nakajima was awarded the Arts Foundation award for experimental music.

“Time passes quickly, in fascination, perhaps because the room has become a complex clock mechanism, hushed and busy, its ticking moving in all directions as if time is a dismembered body, wandering away from itself. There is no such thing as ‘moving forward’; stop using that expression now, or then, or ever.” David Toop on Rie Nakajima (http://davidtoopblog.com/2012/08/23/falling-under-a-charm-rie-nakajima/)

Shelley Parker is an artist based in London. Her practice explores the experiential potential of sound and image through the manipulation of technology and the study of structure and material. Live audio feeds, bass frequencies and found sounds are recurring themes within her performance, installation and music production.

In 2003 she joined the Haywire DJ roster alongside Andrew Weatherall, Radioactive Man and Magda. Her distinctive bass driven sets, encompassing elements of old school hardcore, techno and electro led to regular DJ sets at Fabric, The End and also Tate Britain. Since 2008, she has performed her bass heavy hypnotic live sets alongside artists such as Mick Harris, Mark Fell and Chris & Cosey at venues spanning the Barbican, De la Warr Pavilion and most recently The Outer Church at La Casa Encendida in Madrid. Her site specific live sets include Beachy Head for the Cerith Wynn Evans’ programme incorporating a live audio feed from nearby Beachy Head (De la Warr Pavilion, 2012) and for her residency at Space, a live performance at the White Building employing sounds of the static hiss of pylons and electricity hum recorded at Dungeness Power Station (July 2012). In May 2013 she also contributed to the Hydroacoustics event (alongside Zoviet France, TVO and Roly Porter) with a performance inside the hull of the MS Stubnitz constructed entirely from audio samples of the ship itself.

Her sound installations include Bird Cage for the John Cage retrospective (De la Warr Pavilion, 2011) and Northfleet in All Saints Church, Lydd commissioned by Art in Romney Marsh in response to a performance by the South Bank’s Orchestra of the Age of Enlightenment (2012). Additional commissions include Cast (Cold War Modern Art & Design, Victoria & Albert Museum), Boiler House (Cornelius Cardew retrospective) and film screenings at Supernormal and Latitude. Her music production has received DJ support from Manni Dee, The Black Dog and Ancient Methods and includes remixes for Filter Feeder, Ensemble Adapter and Posthuman. In 2013 she released two solo EP’s: Power Station on her label Structure and Sleeper Line for Entr’acte which was voted by Fact Magazine as one of the best EP’s from Jan – June 2013. Additional releases include Anvil for Acre Recordings and Drill for the Wire Magazine’s Below the Radar series. Since 2007 she has run the label and events programme Structure exploring aspects of found sound, noise and the legacy of British bass music.

Manchester ritualistic improvisors/sound artists Kelly Jayne Jones and Pascal Nichols aka part wild horses mane on both sides present an absorbing and tactile installation-performance work that searches for new ways of experiencing sound while camouflaging the processes of its creation.

The pair tailor each show to the location using bespoke speaker placement, live instrumentation, acousmatic interventions and the subtle deployment of multi-sensory elements, drawing the audience into a bewitching sonic maze. Building upon a core of three looping, simultaneously played tape compositions and a conscious bridling of audio/visual perception, the show’s territory will be mapped in response to each venue’s architecture and acoustics, encouraging participants to explore the space and move through the stageless production generating their own sui generis experience.

Kelly Jayne Jones and Pascal Nichols are part wild horses mane on both sides, a consistently idiosyncratic and adventurous free music group. Hailing from the north of England via France they have the ability to induce hermetic sonic states through a process of ritualistic improvisation. Employing flute, percussion and electronics alongside a vast cache of sonic artefacts that they have collected over the years (field recordings, found objects, old media), they conjure up a bold and evocative ancient/modern sound spectrum. Their compositions/performances traverse epic contours, veering from moments of spare, poetic beauty to unhinged rural psychedelia, unified by an acute awareness of time, space and silence.

They have released countless limited run editions on cassette, vinyl and CD via their own Rayon Recs imprint, Singing Knives, Chocolate Monk, Carnivals and MIE, with a forthcoming release scheduled on Beniffer. Among many projects they have collaborated with Pelt and Michael Morley of the Dead C as Pelt Part Wild Gate and with Ashtray Navigations as Human Horses. They have also worked extensively with the artist Haris Epaminonda on a number of film-sound installations, exhibiting at Tate Modern London, Modern Art New York, Kunsthaus Zurich and Modern Art Oxford among others. 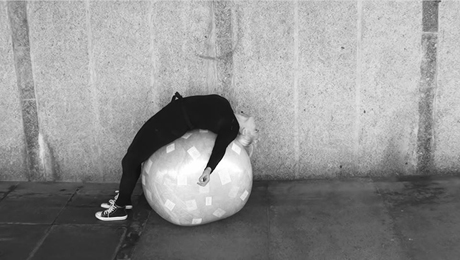 Working outside of our Gallery space we have Izabela Brudkiewicz, who
presents ‘Not so, after all.’

A performance artist based in Hastings who recently graduated from the
Fine Art BA at Hastings College, Izabela’s work is characterised by
extended durational performances undertaken in the public realm. Often
working over a number of days, Izabela’s performances push herself to
the very limits of her physical and mental endurance. Through these
actions Izabela is interested in examining the near endless repetition
of pointless, yet physically demanding tasks, and how these acts can
force her to explore concepts of sacrifice, failure and spiritual
contemplation.

For 7 days, 8 hours a day, Izabela will be pushing a large spherical
object, created from layers of blankets, wire, paper and felt, on a
route along Bexhill promenade and encircling the Pavilion. Through
carrying out these actions in public spaces Brudkiewicz creates an
intriguing intervention, often creating interest and a talking point for
passers by. This human interaction is an important part of the work and
Brudkiewicz will invite people to write notes and thoughts inspired by
her piece. These notes are then added to the ball to remain with
Brudkiewicz for the duration of her task.

The performance will come to an end at the De La Warr Pavilion at 5pm on Sunday the 14th September as part of Dear Serge.

You can view videos of past Dear Serge artists in Dear Serge presents… here at dlwp.tv