Train strike ends this Friday, and trains are said to be back to normal for Saturday. An updated timetable has been posted by Southern Rail showing all late and returning trains running back regularly so travel back after the show should be fine returning to Brighton/Hastings/northbound.
There is also free parking available along the seafront. See link for revised timetables and travel information on our website
www.southernrailway.com/your-journey/revised-timetable
www.dlwp.com/visitus/visitor-information/
‘I’m supposed to be dead!’ So said Wilko in a recent interview, having been diagnosed in late 2012 with terminal pancreatic cancer. But despite the doctors’ worst predictions he continues to perform and present himself with vigour and a new zest for life.

“Man, there’s nothing like being told you’re dying to make you feel alive.”

Amen. And whether you’re black, white, green, atheist or believer, it’s what you put into life that’s going to get you anything, or nothing, at the end.

And into it Wilko is putting his all.

The man from Canvey Island, who studied English at Newcastle University before doing a bit of travelling, could have been a retired teacher by now, sucking on a pipe and whittling away at his pension. But no, Wilko was lured into music by the dark magic spun by his first Telecaster, bought from a music store in Southend, Essex, soon after becoming the strutting, grimacing, six-string rhythmic powerhouse behind Lee Brilleaux in Dr Feelgood.

Feel good? Audiences certainly did in the mid ’70s as Wilko duck-walked his way across countless stages and venues in the UK, with Dr Feelgood in the vanguard of the pub rock movement, performing the gutsy down-to-earth rock and roll that was a welcome antidote to the faltering prog-rock era.

Heavily influenced by legendary guitarist Mick Green from ’60s rockers Johnny Kidd & The Pirates, Wilko employs a finger-style, chop-chord strumming action (the ‘stab’, as he describes it). This allows for chords and lead to be played at the same time, giving a fluency and a distinctive sound very unlike the cleaner swat of a pick.

With this economic sound, coupled with that black-suited, scowling look, and the yards he covered across the stage pausing only to twist the guitar lead out from under his feet, Wilko became one of the guitar heroes of the era. His influence was felt in bands up and down the country, and later in the emergent punk revolution (Joe Strummer of the Clash bought a Tele after seeing Wilko play). 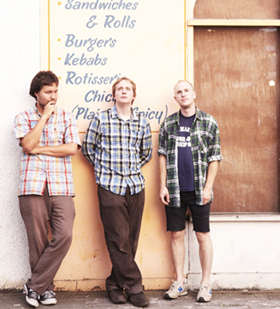 The Wave Pictures returned to DLWP earlier this year with a brand new, vinyl only album called A Season in Hull, out on their own label Wymeswold Records. The album was recorded on acoustic guitars in one room, with a bunch of their friends, live in to one microphone on singer Dave Tattersall’s birthday, January 28th, 2015. The songs were written as quickly as possible and the recording captures that specific moment in all its spontaneous, thrilling and immediate glory. As Tattersall elaborates: “That’s what this is – a one-microphone happy birthday recording.”

The band reveal the video for the first single “Slick Black River From the Rain From the Rain”. Dave Tattersall says this about the song: “I am crazy about E Minor, specifically on the guitar. There are 3 main ways that you can play it on an electric guitar: open; barred on the 7th fret; or barred on the 12th fret. (On an acoustic guitar you usually just have the first two options). The 7th fret version is just the right colour for me. I write more songs in this key, and in this position, than in all the other keys put together. The reason is that it is my favourite! The 7th fret, guitar version of the E Minor chord has such a strong, evocative, pull to it. But if you play E Minor on a piano, it’s nothing special at all, just another minor chord. All the chords are equal on a piano, but a guitar contains magic chords. On a guitar some chord positions are much better than others. These are magic chords!”

Earlier in the year The Wave Pictures (Jonny Helm, Dave Tattersall and Franic Rozycki) released Great Big Flamingo Burning Moon, their critically acclaimed collaboration with Billy Childish. They cemented their reputation as one of Britain’s most beloved and exciting live bands around with a sold out gig at London’s legendary 100 Club, their biggest headline show to date at The Tufnell Park Dome and an astonishingly heartwarming performance headlining the Garden Stage at The Green Man Festival.

In conjunction with Bexhill Motofest (13 & 14 August)