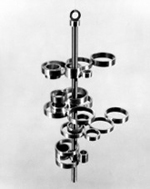 Kenneth Martin and Mary Martin were at the forefront of artists including Victor Pasmore who ‘rediscovered’ abstraction during the 1940s. Kenneth Martin’s mobile sculptures and Mary Martin’s reliefs are based around mathematical principles and display extraordinary innovation.

Kenneth and Mary studied painting at the Royal College of Art, where they met. Their methodical approach and structural framework allows for chance and surprise.

Kenneth Martin referred to his constructions and mobiles as drawings in space. His largest mobile, commissioned for London Zoo in 1961, has been specially restored for the exhibition. Mary Martin’s work embraced both hand-crafted techniques and industrial mass production. She used permutations determined by mathematical principles, such as the Golden Section or the Fibonacci sequence. These numerical structures being based on forms found in nature, the Martins’ work has a natural feel.

They also believed that art had a social role to improve life and worked on a series of public commissions, Mary made wall constructions for the MusgraveHospital in Belfast and Kenneth’s Screw and Reflector mobiles were exhibited in a children’s ward at the WhittingtonHospital.