UNKLE and Heritage Orchestra Variation on a Theme

The De La Warr Pavilion presents another one-off collaboration between resident orchestra the Heritage Orchestra and a world-class artist.

In this second of a series of high-profile concerts at the Pavilion they will perform with UNKLE, led by James Lavelle and Pablo Clements. Anyone who came to the Heritage Orchestra’s last gig with Beardyman in November will know that they produce extraordinary events, where music and visual art merge to create a new and powerful experience. 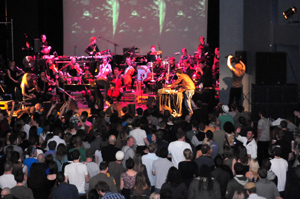 The Heritage Orchestra is a 21st century orchestra whose modern production values have set them apart as trail-blazers who bridge the world of mainstream, cult, popular and experimental art and music.

UNKLE’s use of traditional orchestral instrumentation has been developing over the last few years. Trouble in Paradise, the track famed for its inclusion on the BMW advert, was recorded using a 48 piece orchestra.  Many of these instruments were used in the writing and construction of both End Titles…Stories for Film and the End Titles… Redux albums.

The formidable UNKLE, who released their fourth full-length album Where Did the Night Fall on May 10th, are adding an entirely new dynamic to their critically acclaimed compositions by performing their extensive catalogue of music with a full orchestra. This classical take has been showcased by the band only once before, at the Union Chapel with the Heritage Orchestra in 2008. 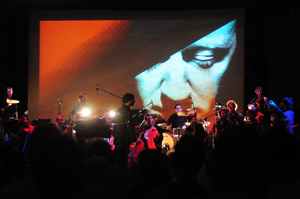 UNKLE have worked with classical musicians throughout their career. Heritage Orchestra previously appeared on Trouble in Paradise and were involved in the writing and construction of End Titles…Stories for Film and End Titles…Redux. Most recently they appear on four tracks on the new LP Where Did the Night Fall, which was recorded in various locations around the world and also takes in influences from psychedelic rock to afrobeat to vintage electronica.

Never afraid of taking risks or trying out new ideas, the Heritage Orchestra are set to unravel the amazing textures and sounds of UNKLE on July 10th, performing another spell-binding blend of amplified orchestra, electronic sounds, synthesisers, and reactive visual art.

Admission to the Auditorium after this time will be at the venue’s discretion during breaks in performance.

To find out more about Heritage Orchestra or UNKLE visit their websites: