RPO and The Bexhill Festival of Music. Interview with Brian Wright. 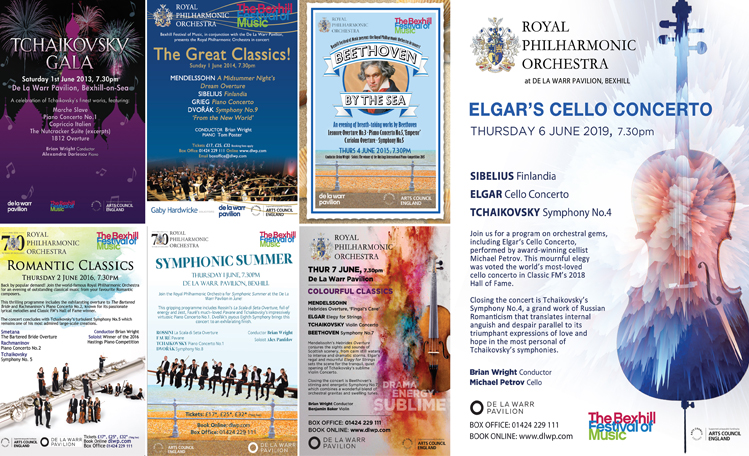 Ahead of Bexhill Festival Of Music at the De La Warr Pavilion read an interview with Brian Wright who is talking about the history of the Festival and the upcoming Royal Philharmonic Orchestra’s Elgar’s Cello Concerto.

Bexhill Music Festival is a highlight of the music calendar! Can you talk a little bit about the history of the festival and your involvement?

The Festival was started 13 years ago, the year my wife Sue and I moved to Bexhill. Incidentally, it’s a great place to live and the best move we’ve ever made! I understand the Festival was originally designed for local groups to come together during the month of June and present what they do under a single umbrella. But in 2012 I’d been talking to the then RPO Managing Director Ian Maclay, and Sue knew the then Festival Director, so we put them together at the De La Warr Pavilion. Bexhill worked its magic on a gloriously sunny summer day, and we gave our first concert together at the De La Warr in June 2013. Frankly, Bexhill had been deprived of hearing a professional orchestra for decades, so the audience lapped it up, and I’m glad to say we’ve had very good audiences every year since. Professional music-making involves a vast amount of travel, so it’s a real joy for me once a year to conduct a concert just five minutes away from home!

For people who are not familiar with Elgar’s Cello Concerto, what should they listen out for?

It’s a work I love and I’ve been really privileged to conduct it with some great cellists over the years, from Paul Tortelier and Stephen Isserlis, to last year – when he performed it for the very first time – Sheku Kanneh-Mason. Each time it’s the slow movement that really gets an audience – a very moving look back by Elgar to the anguish of the recent 1st World War. But overall Elgar’s Cello Concerto isn’t a tragedy. There are a great many moods which the soloist acts out and links in a story line rather like a narrator.

And what else can audiences expect from this concert?

To end we’ve Tchaikovsky’s exciting and very passionate 4th Symphony. Tchaikovsky was typically Russian in his belief that we’re all governed by the disruptive power of fate and it really shows in his opening movement. But as he said about the meaning of his boisterous finale: “If you can find joy in the joy of others, you can still enjoy life!” Again, that’s typically Russian. And to begin we’ve Sibelius’s famous Finlandia which was seen as a rallying call for independence from Russia in his native Finland.

What is the best perk of being a conductor?

Undoubtedly it’s when working with great colleagues, like the RPO’s players, you can set out the parameters of what you’d like in rehearsal, but then at the concert feel that you’re just letting them play. Conducting is a ridiculous business really – part musician and part mime artist.

Have you worked with Michael Petrov before? (and if so, can you talk a bit about how you’ve work together?)

Yes, Michael played a very fine Dvorak Cello Concerto with me a couple of seasons ago. We should have performed Shostakovich together earlier this season, but he had to withdraw having injured his hand. He’s a lovely young player – Bulgarian, but an Anglophile, and he studied and now lives here. I’m very much looking forward to hearing his take on Elgar.

What is the best feedback you’ve ever received from an audience member?

That’s difficult and this is a bit bland. But it’s probably been when someone I don’t know has unexpectedly come up to me after a concert and said a simple “Thank you, I really enjoyed that”.

Tickets for the Elgar’s Cello Concerto can be booked here