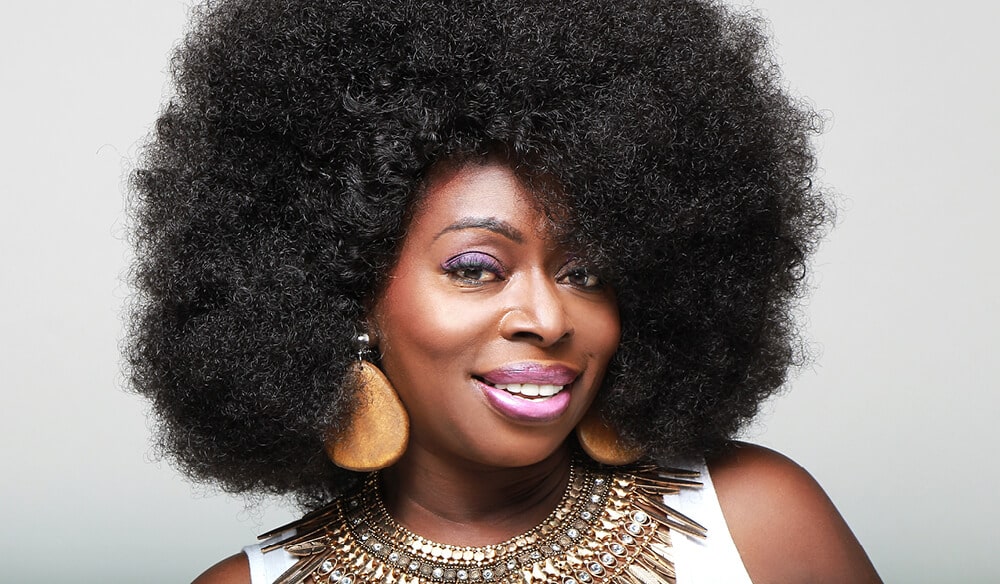 Neo-soul icon Angie Stone will be performing at the De La Warr Pavilion in 2023!

Stone rose to prominence as the lead singer and rapper of hip-hop trio The Sequence. After working with both Lenny Kravitz and D’Angelo in the 1990s, Angie Stone released her solo debut album Black Diamond in 1999. The album yielded one of her best known songs, ‘No More Rain (In This Cloud)’ – which paid homage to Stone’s soulful influences by sampling Gladys Knight & The Pips’ aching ‘Neither One of Us (Wants To Say Goodbye)’.

After moving to Clive Davis’ J Records label, Stone released her seminal album Mahogany Soul in 2001. The album featured Wish I Didn’t Miss You which sampled the evergreen classic by The O’Jays’ Backstabbers. The song has become the signature tune for Angie Stone being streamed 100M times on Spotify.

Singer, MC, self-taught keyboardist, and prolific songwriter, Stone’s first claim to fame was her membership in the Sequence; a pioneering hip-hop trio who arrived with “Funk You Up” (1979), the second release on Sugar Hill Records and the first rap single by an all-female group.

Following a brief period with the post-new jack swing R&B act Vertical Hold, Stone began a fruitful and lasting solo career as one of neo-soul’s leading lights, known for providing sharp insight into romantic relationships with her smoky yet upfront voice. She established her solo career with a pair of gold-certified albums; ‘Black Diamond‘ (1999) and ‘Mahogany Soul‘ (2001), and added to her accolades with Grammy nominations in the R&B field for More Than a Woman (2002), U-Haul (2004), and Baby (2007).

Increasingly occupied with acting roles, she has continued to record every few years, exemplified by deeply soul-rooted LPs such as Rich Girl (2012), Dream (2015), and Full Circle (2019).

A native of Columbia, South Carolina, Stone began singing gospel music at a young age at First Nazareth Baptist Church. Her father, a member of a local gospel quartet, would take his only child to see performances by gospel artists such as the Singing Angels and the Gospel Keynotes. During her youth, she wrote poetry, played sports, and, after high-school graduation, was offered college basketball scholarships. While working dead-end jobs, Stone began saving money to record her own demos at a local studio called PAW. She joined Gwendolyn Chisholm and Cheryl Cook in the rap trio the Sequence, who recorded hits for Joe and Sylvia Robinson‘s Sugar Hill label. These included Funk You Up, a remake of Parliament‘s hit Tear the Roof Off the Sucker called Funky Sound (Tear the Roof Off), and I Don’t Need Your Love.

Soon after, Stone worked with futuristic rap group Mantronix and rocker Lenny Kravitz, and formed the sophisticated R&B trio Vertical Hold, who in 1993 hit the R&B Top 40 with Seems You’re Much Too Busy. The group split after its second album.

Stone subsequently signed to Arista as a solo artist and recorded 1999’s Black Diamond, a Top Ten R&B album that was certified gold on the strength of the singles No More Rain (In This Cloud) and Everyday (one of several songs she has written either for or with D’Angelo). The album won her a pair of Soul Train Lady of Soul Awards. She shifted to J for 2001’s Mahogany Soul, another gold seller. That album’s More Than a Woman, a duet with Calvin Richardson, earned a Grammy nomination in the category of Best R&B Performance by a Duo or Group with Vocals. Stone Love, released in 2004, fared just as well commercially with U-Haul, another Grammy-nominated performance, among the highlights. Stone smoothly moved to the revitalized Stax label for her fourth studio album, 2007’s The Art of Love & War. It topped the R&B/Hip-Hop Albums chart and featured two of her best singles, Sometimes and the Betty Wright collaboration Baby – the latter of which made Stone a three-time Grammy nominee.

Throughout the next several years, the singer’s studio output remained consistent in terms of chart performance, despite a series of label changes and frequent acting work. (By the end of the 2000s, Stone had appeared in several movies, including The Fighting Temptations, Pastor Brown, and Scary Movie 5, as well as the television programs Moesha, Girlfriends, and Lincoln Heights.) Unexpected, released on Stax in 2009, hit the Top 20 of the R&B chart. Saguaro Road issued Rich Girl, Stone’s most stylistically diverse set, three years later, and it peaked slightly higher. For Dream, released in 2015, she joined the veteran-loaded Shanachie roster. The next year, the Goldenlane label issued Covered in Soul, for which Stone updated classics popularized by the Guess Who, the Five Stairsteps, and Carole King. Stone changed labels again for the 2019 set Full Circle, featuring the Jaheim duet Gonna Have to Be You.

THE BEAT
with Dave Wakeling

All dayer by the beach

Life In The Past Lane Tour