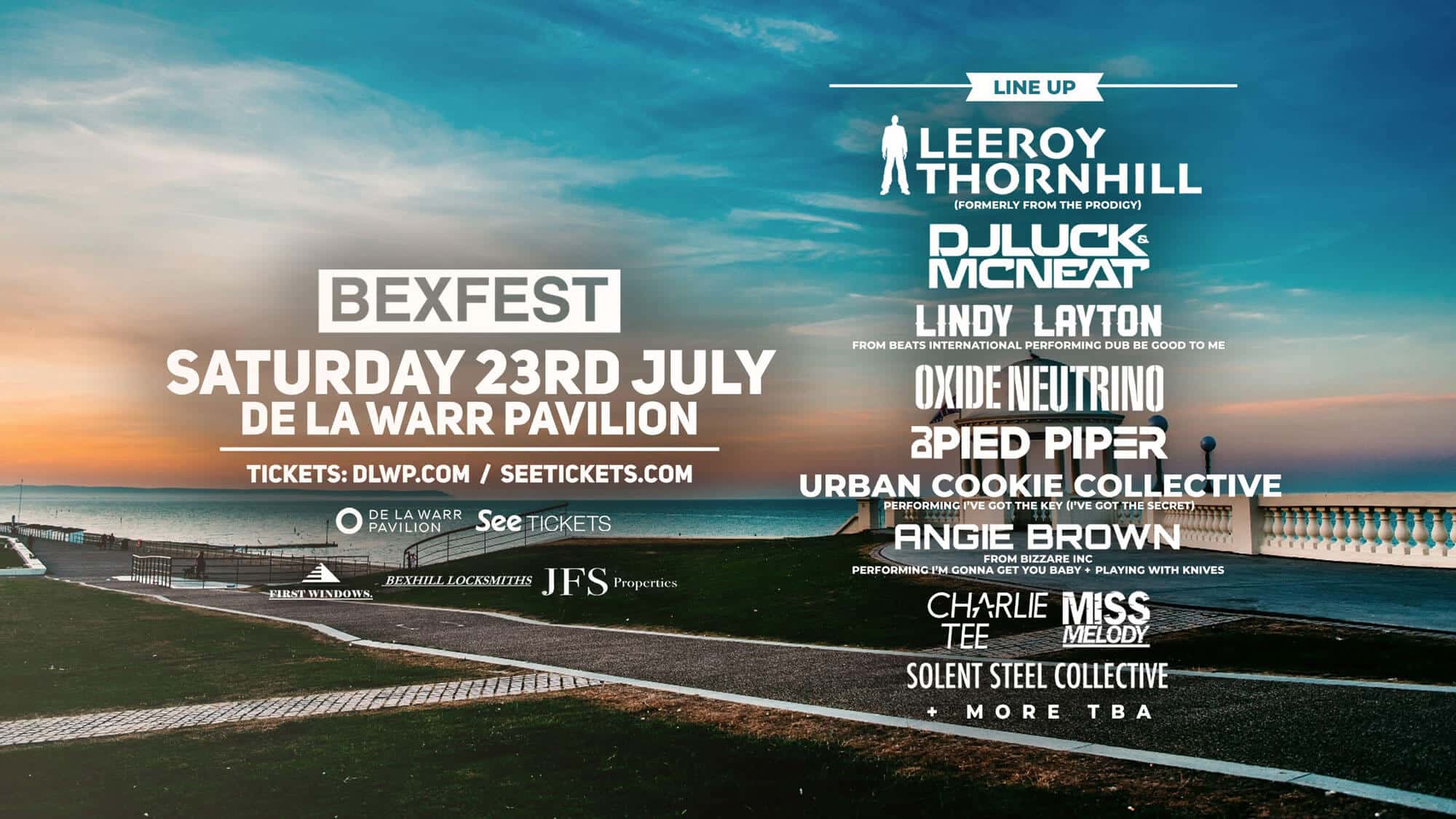 If you're ready to RAVE, Bexfest 2022 has got you covered.

Please note that the building will only be open to ticket-holders on the day.

LEEROY THORNHILL
formerly of The Prodigy

ANGIE BROWN
from BIZARRE INC
performing ‘I’m Ganna Get You Baby’
+ ‘Playing with Knives (Gotta Get Up, Gotta Feel Blue)’

As part of one of the biggest and greatest bands & 90s dance acts in the world, Leeroy spent 10 years as part of the Prodigy.

Don’t miss Leeroy performing at Bexfest. You do not want to miss this!

With chart topping hits such as
“Little bit of Luck” “Ain’t no stopping us”
“Master Blaster” + “Piano Loco”
Garage sensation Luck & Neat have dominated the Uk scene since 1999.

She was a founding member of, and vocalist for Beats International.
One of the most notorious renown songs of the 90s, and number-one smash hit “Dub be good to me” & many more.

Their hit track “No Good 4 Me” sampled from the Prodigy reached the top 10 on the UK chart peaking at number 6.

Lead vocalist from Bizarre inc had a certified Silver hit single ” Im gonna get you” in 1992.

In 1992 she had another smash hit with “Playing with Knives”

Brown performs in the bridge and chorus Platinum Certified hit “Return of the Mack” by UK artist Mark Morrison.

The lead singer from Urban Cookie Collective had two chart topping Uk hits in In 1993.

Garage sensation and DJ, Pied Piper had hit single with “Do you really like it” it reached the number 1 spot on the Uk charts for one week from 27 May to 2 June 2001.

Recently making her BBC Radio 1 debut, covering for Danny Howard, you may also know Charlie Tee from her shows on Kiss FM for the past 6 years!

Her unique sound, hosting & crowd hype abilities have led her to headline and perform for various styles alongside worldwide renowned DJs.

Known as “One of the most recognised and respected female MCs”.

Duo Portsmouth based Solent Steel brighten up any day with their unique Caribbean brass sounds performing worldwide famous covers of all your favourite songs!