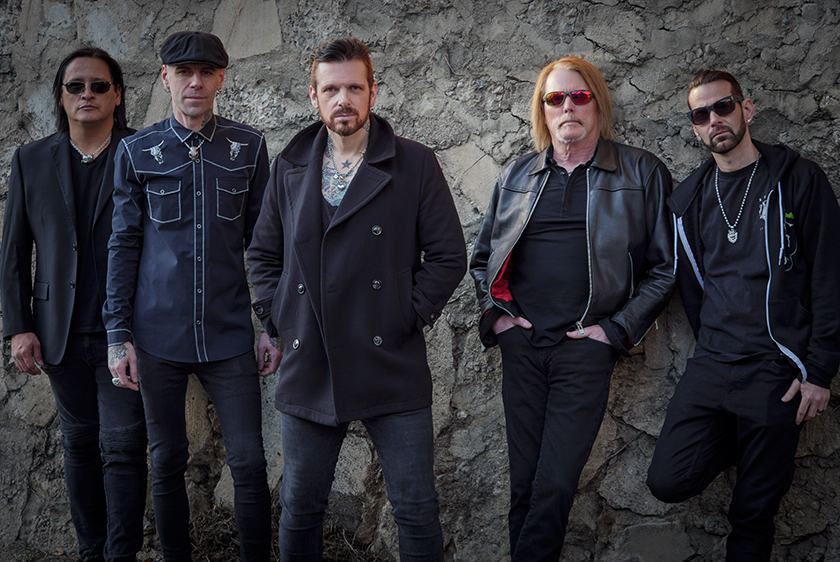 Black Star Riders have announced new album title and full UK tour and are coming to the Pavilion this Autumn.

Ricky Warwick: “I’m absolutely thrilled to be back with a brand new Black Star Riders Album. In my honest opinion this is the best record the band has made! This is Christian and Chad’s first album with the band and they have brought a fantastic energy and vibe”

Scott Gorham adds “It was great to be back in Los Angeles and recording with Jay Ruston was an absolute pleasure. I am excited to see everyone’s reactions to this amazing record … and I can’t wait to get back on the road and play you these new songs!”

The band previous album, Heavy Fire, was released in 2017 and enjoyed widespread fan and critical acclaim. The album enjoyed success in many countries and went on to score multiple high chart placing’s & radio playlists. They toured extensively in support of the release with notable appearances on the SOLD OUT Rock Legend’s VI cruise out of Florida, alongside Sammy Hagar and Bad Company and very successful tour of North and South America with metal legends Judas Priest.

Following on from their previous albums All Hell Breaks Loose, The Killer Instinct and Heavy Fire which have paved the way for Black Star Riders to be recognized as a power force in the modern day of Rock n’ Roll, Another State of Grace will be once again released by Nuclear Blast Entertainment.

After a lengthy period off the road, Black Star Riders are back with a 15 date UK & Ireland Tour with special guests Stone Broken and Wayward Sons.

Ricky adds re the tour: “I’m also very happy to have our friends in Stone Broken and Wayward Sons on the bill with us. A tour of epic proportions… not to be missed!”

Stone Broken, hailing from Walsall are an exciting new British rock band on a fast upward trajectory.
Signed to Spinefarm Records UMG, the band’s 2018 album ‘Ain’t Always Easy’ charted in the UK national top 40 and their subsequent UK headline club tours have sold out shows in Birmingham, Cardiff, Stoke, Newcastle and London. With over 2.5 million Youtube views, a top 50 US rock airplay hit and the most played airplay act on UK Planet Rock radio in 2018, the band have a loyal and rapidly increasing fanbase throughout the UK and beyond. With great album and a hard rocking live show, Stone Broken are most definitely a British rock act on the way up.

Reset the counters! Toby Jepson is back with WAYWARD SONS his brand new band and Ghosts Of Yet To Come, his first new album in over 20 years.
After the incredible success of Little Angels, a number one album, millions of records sold, massive sell out shows and numerous hit singles, Toby has been busy these past years in movie work, performing with Fastway, Gun and Dio’s Disciples and producing albums for numerous bands (Saxon, Fastway, Virginmarys).
His heart however, is always in writing and performing and so the concept of WAYWARD SONS was born – a new band, built for playing live, a new direction with Toby’s songs centre stage and a new album, signed to Frontiers Music SRL, with all the hallmarks of a great debut.
Wayward Sons, handpicked by Toby are Nic Wastell (bass, Chrome Molly) Phil Martini (drums, Spear Of Destiny, ex Quireboys, Joe Elliot’s Down and Outs) Sam Wood (guitar, a real new gunslinger from Treason Kings) and Dave Kemp (keys, ex Little Angels touring band and long time sideman to Toby). GOYTC was written in a live band situation, a first for Toby
‘’I decided to get out of my comfort zone, new players, no ‘been there done that’ and it totally worked’ says Toby. 26 songs were written in a series of rehearsals at Peter Gabriel’s Real World Studios and 14 were then taken into Vale Studios in Worcestershire and recorded in a live band situation with Toby co producing with Chris D’adda.
Passionate, honest music made by passionate honest musicians who have come together to create rock music that reflects their heroes from the ‘70s and ‘80’s – modernity through homage…..Wayward Sons