This is the new date for Ladysmith Black Mambazo, rescheduled from 22 May 2021.

Join Ladysmith Black Mambazo as they celebrate the life and music of their founder Joseph Shabalala with their upcoming tour.

Joseph retired from the group in 2014 and handed leadership of the group over to his four sons Thulani, Msizi, Sibongiseni and Thamsanqa, who carry Joseph’s dream of a united South Africa into the future.

Ladysmith Black Mambazo are one of the world’s greatest and most distinctive vocal groups. For sixty years the legendary a cappella male choir have invoked the soul of South Africa with their intricate rhythms and harmonies and powerful, uplifting songs.

They shot to global stardom after featuring on Paul Simon’s Graceland and have been touring the world ever since.

“Gorgeous harmonies from the South African vocal ensemble, best known for their work with Paul Simon on Graceland. Though they sing entirely a cappella, their songs have a rhythmic spring, and their dance moves are light-footed and elegant” (Daily Telegraph)

‘With their cheeky scissor-kicks, Ladysmith Black Mambazo were pretty spry for a 60-year-old choral group. Their line-up has evolved… but the South Africans’ close-knit harmonies are just as faultless as they were on Paul Simon’s Graceland, which, in 1986, brought them international fame.’ ★★★★ Telegraph

The support act for the evening will be Muntu Valdo
Progenitor of the amazing Sawablues, a new genre of music, Cameroon-born Muntu Valdo’s music is rooted in the blues, mixing African traditions with striking modernity and technical mastery. He’s travelled all over the world, supported and played alongside some of the great names of African and international music including, Manu Dibango, Ladysmith Black Mambazo, Ali Farka Touré, Damon Albarn, Richard Bona, Boubakar Traoré and Lucinda Williams just to name a few. His mesmerizing solo set juxtaposes his raw, passionate voice and intensely emotive melodies, intricate African guitar lines with an ingenious use of loops and effects to create sun-kissed groove heavy Sawa Blues. 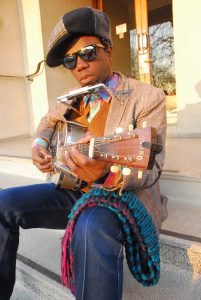 Fully seated
All ages. U14s must be accompanied by an adult 18+
No flash/recording

From £22Book
The Gig Cartel Present