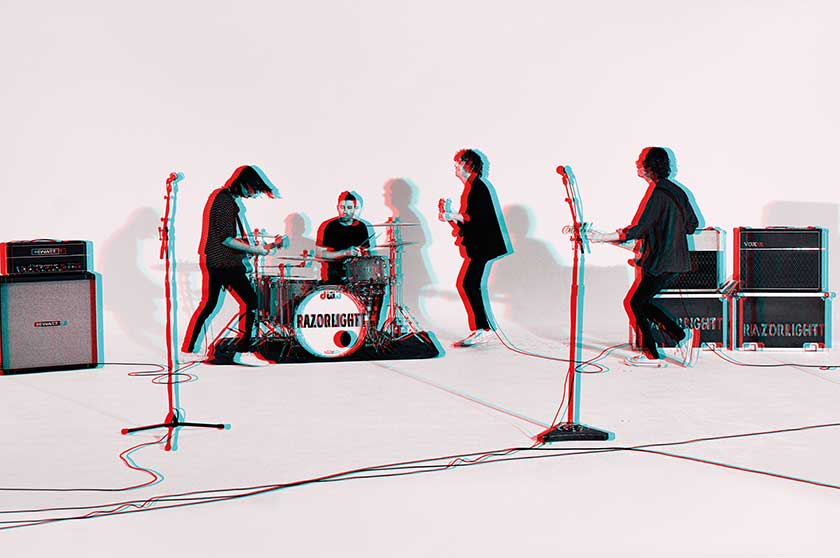 Indie-rock elite Razorlight have announced their official return, with the release of their first album in 10 years, Olympus Sleeping.

Razorlight were formed in London in 2002 around lead singer Johnny Borrell. They quickly became one of the key guitar bands of the following decade, selling 4 million albums, playing sold out arena tours and headlining festivals.

Their debut album, Up All Night, was released in the UK in 2004 reaching number three in the UK Album Chart. They won the NME Best New Band award in 2005. The first album included a hoard of immaculate singles Rip It Up, Golden Touch, Stumble and Fall and Vice as well as Somewhere Else, which reached number two on the UK singles chart.

Razorlight’s second album, Razorlight (July 2006), debuted at number one in the UK. The lead single, In The Morning, reached number three in the UK and America went straight to number one. In 2007, Razorlight were nominated for two BRIT Awards – ‘Best British Band’ and ‘Best Song’ for America – and two NME Awards – ‘Best Band’ and ‘Best Album’. The band headlined Reading Festival in 2007 and toured globally, supported The Rolling Stones and U2. They played shows for Nelson Mandela’s AIDs charity, appeared on the cover of Vogue (Johnny) and were pursued by UK paparazzi.

Having established themselves as a classic British band, they kept the momentum up with writing session for album three ‘Slipway Fires’. In late 2008 the lead single ‘Wire to Wire’ went to number five in the UK charts and in 2009 the band headlined O2 Arena, flew round the world twice and landed in the UK for some of the summers’ major festivals. In Germany ‘Wire To Wire’ was the sixth biggest chart hit of 2009 and the album went Gold. The band played UK shows through 2010 and began to write for the fourth album, during which there was an amicable parting with guitarist Bjorn Agren and bassist Carl Dalemo.

With drummer Skully taking over from Andy Burrows they headlined a series of major shows across the summers of 2011 and 2012. Meanwhile a fourth album was recorded, but doubts about the record meant it was never released. In 2013 Johnny took time out to form a very different band Johnny Borrell and Zazou. Influenced by world music and Johnny’s experience of living outside the UK in the Basque country, the band released two albums – ‘Borrell 1’ and ‘The Atlantic Culture’ in 2013 and 2016 and toured clubs and festivals.

The hiatus from Razorlight came to and end in 2017 when Johnny began trying songs with guitarist David Ellis, formerly of Babeshadow. David joined the new line up and a reinvigorated band started working on songs for a fourth album proper. By late 2017 they knew they had a wildly fresh tracklisting for an album and entered the studio with up and coming Italian producer Tomasso, continuing to recording through to Feb 2018.
With their best record for years in the bag, Razorlight are set to confirm their place as one of the most compelling, maverick guitar bands to have emerged out of the UK.

Formed in Sittingbourne, Kent, it wasn’t long before Indoor Pets’ effortless songs were attracting attention, with one of them making Record Of The Week on BBC Introducing and within two weeks Huw Stephens had picked up on the track.

For the next few years Indoor Pets wrote and gigged incessantly, building up a batch of killer tunes and a devoted fanbase across the country. They did, and still do, everything themselves. From making the artwork to organising their own tours on the road, producing music, building their own stage monitoring system and even running their own finances (Simpson: “if anyone wants to spend any money they have to ask me,”). It’s a fiercely DIY ethic born less from punk principle as it was from necessity. “It was either do it yourself or don’t have it done,” notes Glass, “and we decided to do it ourselves.”

Signing to Wichita Recordings, the band set about recording their debut album due for release in March 2019, a record seemingly full of a bottomless pool of great tunes. Familiar feelings of not fitting in or wanting to play the hand life’s dealt you are delivered with self-deprecating wit and Glass’ trademark use of double-bluffing word play. Think Rivers Cuomo and a pre-sandpit Brian Wilson bunking off school to play records and snigger at the cool kids. They’re smart, life-affirming and all contained within a thumping primary-coloured pop wallop.