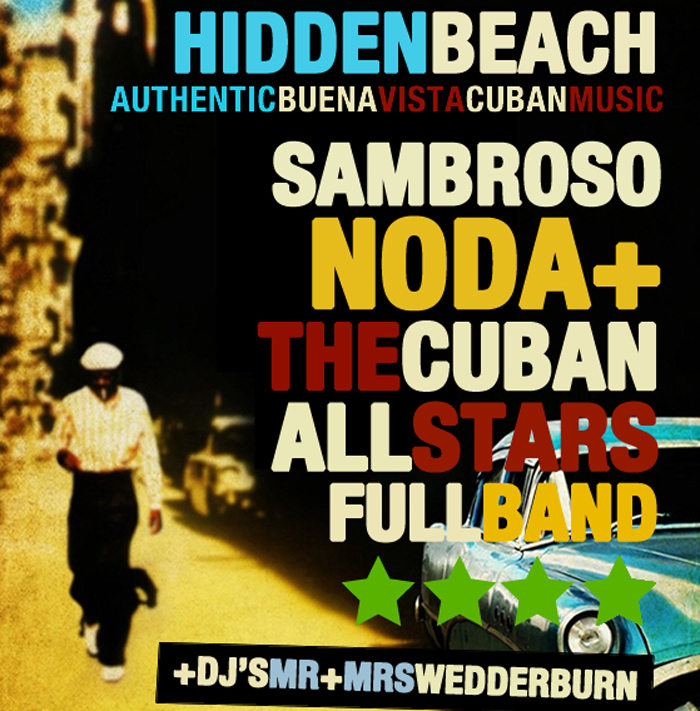 On the South Lawns.

No re-entry after 7pm.

Sambroso Noda & The Cuban All Stars

Take a trip to Havana and feel the romantic rhythms, inspiring percussion and unique sounds of this amazing country.

World class Latin musicians, who honour the rich and colourful sounds of Cuba with a high-octane live performance of the country’s finest musical exports.

Sambroso Noda, the beating heart of London’s Cuban community and flourishing music scene, creates an all-star group of musicians to pay their own unique and loving tribute to the wonderful world of Cuban music. Expect music from the likes of Buena Vista Social Club, Afro Cuban All stars, Celia Cruz and more.

DJ’s, Mr & Mrs Wedderburn. Gordon has produced and presented a number of jazz shows for internet radio, in addition to showcasing some of the UK’s finest jazz talent through his very popular events. His services have been sought by the UK umbrella jazz organisation, Jazz Services and he contributed to one of their very informative guides directed toward the musicians in the UK jazz community. He also finds time to write music reviews and is a selector/DJ presenting jazz and world related music on the decks at various events.

FELAbrating The Music of Fela Kuti

HiddenBeach are very excited to bring you a once in a lifetime live music show: A tribute to Fela Kuti.

We’re FELAbrating the Godfather of afrobeat with a VERY exclusive performance by Dele Sosimi & Friends. Dele Sosimi is an original member of Fela Kuti’s band and also performed with the legendary drummer Tony Allen. Also performing on the night are the amazing afrobeat band Samaki and Remi Vibesman providing an Africazilica DJ Set. It’s going to be a show to remember!

All ages. No ticket concessions for under 14s and they must be accompanied by an adult during the event.

MUSIC’S NOT DEAD
Bexhill’s independent record store Music’s Not Dead will be open in the DLWP Foyer.
We are part of #1066MusicCity
Important Information About This Event
Booking information

From £49.50Sold out
Atom Promotions and DLWP present