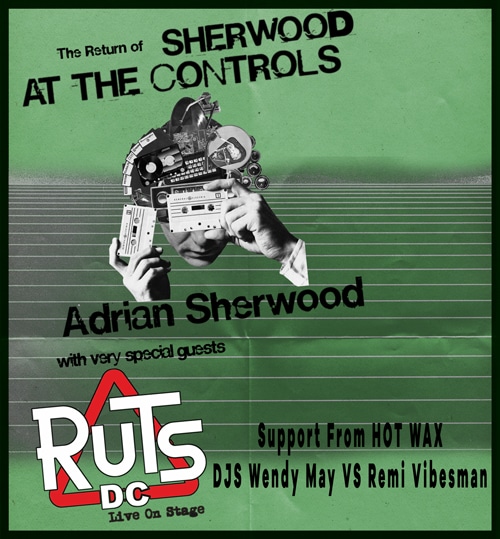 For more than three decades, Adrian Sherwood has been consistent in breaking new ground with his productions. The founder of the fiercely independent cult label On-U Sound, Adrian’s name is celebrated by anyone with an interest in dub, reggae, punk, post-punk, industrial, bass music and experimentalism. Unsurprisingly a musician’s musician, Adrian has produced and remixed everyone from The Slits, to Nich Inch Nails, Depeche Mode to The Fall, Blur to Einsturzende Neubauten, Primal Screen and more. More recently his remixing and production skills are sought after by Dubfire, Mark Lanegan and Leftfield to name a few.

Adrian has built up a colossal body of work whose diversity is hallmarked by his unique bass-anchored sound. And his name draws reverence or his unparalleled works with collaborators such as Prince Far I, Lee Scratch Perry, Horace Andy and Mikey Dread.

Remi Vibesman’s passion for music started aged 9 when his parents took him to the Festac 77 month long Festival, known as the World Black and African Festival of Arts and Culture held in Lagos, Nigeria. The month-long event showcased over 16,000 participants, including Fela Kuti, Stevie Wonder and many more artists on the international stage.

He began his career in the industry through the creation of WaxCity Music, a vinyl record store in London. He started the independent record labels Big Cheese Recordings, Freshmess on Wax and  Phat Vibes Recordings pushing the independent soul, acid jazz, house, trip hop, nu jazz and hip hop scene internationally. He worked professionally as a recording artist creating productions under the names, The Retravibe Movement and Phunk Not Punk and Hookian Mindz. The music received heavy DJ rotation by such international DJs as Norman Jay and Soul II Soul leader Jazzy B.

For as long as Wendy May can remember, life was never going to be straightforward, she always knew it would hold more than her South London working class roots would have her believe. Music saved her from a life of boredom and poverty, firstly becoming the “punk buyer” for Virgin Records in Swansea & then Manager at Notting Hill Gate branch at a time when the Clash, Elvis Costello and the like were regular customers. She filled her life with gigs, and eventually in the early 80’s she joined the hillbilly punky ska band The Boothill Footappers. Label mates with Billy Bragg and the Housemartins, they toured extensively and had a radio hit with their first single “ Get your feet out of my shoes” hailed by the NME as “ the thinking woman’s answer to Tammy Wynette’s “Stand by your Man”.

After extensive touring and some John Peel sessions they eventually signed to Phonogram and made an album in 85, which featured the legendary John Martyn on guitar.

Taking 10 musicians out on the road in the back of a van eventually took its toll and the band broke in 86.

Wendy went on to start a clubnight at Kentish Town’s “Town & Country Club” on Friday nights called “Wendy May’s Locomotion” which regularly pulled in 2000 clubbers and is featured in Nick Hornby’s book “ 31 Songs” as he was a regular and big fan.

Seen as a welcome alternative to some of the pretentious clubs in London at the time, there was no dress code and the music was soulful, wild and real. Frequented by the likes of Madness, Elvis Costello, Paul Weller, it became home from home for Camden boys The Pogues. Norman Cooke aka Fatboy Slim did one of his first ever DJ sets warming up for Wendy when he was just the bass player with The Housemartins, and Phill Jupitus first took to the decks at her club!

In ‘87 she co-presented the last series of The Tube for Channel 4 with Jools Holland & Paula Yates whilst also being the only female DJ & “youth presenter” on London’s Capital Radio, giving live sessions to up & coming bands.

DJing for the past 35 years, including Glastonbury, Miner’s Strike benefit gigs, tours with various bands and comedians, she is still happiest dancing behind the decks spinning her favourite records from her collection!

Now living in Hastings, you can find Wendy May every month on Eddie Piller’s Totally Wired Radio Station, at the now legendary Chez 66 club in Soho, Modcast & Locomotion nights and also as a guest DJ at many a club/gig across the South of UK

Tipped as one to watch, Hot Wax have already had their material played on BBC Radio Introducing, BBC Radio 6 and Radio 1.

They’ve also got the attention of successful and critically acclaimed songwriter/ drummer/ recording artist, Joel Amey of the Brit Alt – rock and Mercury Prize winning band, Wolf Alice. Joel bigged the band up and picked them as one of his favourite new artists when talking to Jack Saunders during Jack’s popular Radio 1 show…… “Oh man! If they’re doing this now, the world is their oyster!” – Joel Amey.

The band have a number of festivals and gigs booked over the summer, one of which they’ll be supporting fellow Hastonians, Kid Kapichi.

We are asking all ticketholders to demonstrate their COVID-19 status for this event.

Please see below for full details.

In order to keep everyone safe, we are asking all ticketholders to demonstrate their COVID-19 status by showing one of the following:

Please use the NHS COVID Pass to show your vaccination status using the NHS App or use the NHS website to download it as a PDF or get it sent to you in an email.

You can also get a paper version sent to you in the post. You do not need to be registered with a GP surgery or have an NHS login for this. You can get a letter (within 5 working days) by requesting a COVID Pass letter online or calling NHS 119.

We cannot accept vaccine cards issued at vaccination centres as proof of vaccination.

PROOF OF A NEGATIVE NHS LATERAL FLOW TEST – taken less than 24hrs before arriving at the DLWP.

You will need to demonstrate your negative NHS Lateral Flow Test result by showing us one of the following:

Text OR email confirmation of your result

OR by using the NHS COVID Pass, available through the NHS App

PROOF OF NATURAL IMMUNITY – based upon a positive PCR test within 180 days of arrival at DLWP (and after the 10 day self-isolation period following the result).

Please use the NHS COVID Pass to show your positive PCR test within the past 6 months using the NHS App or the NHS website, after you’ve finished self-isolating and up to 180 days after taking the test.

Please note, we will be carrying out random Covid Pass checks at the Main Front Doors and you may be denied entry if you fail to provide proof of your Covid-19 status.