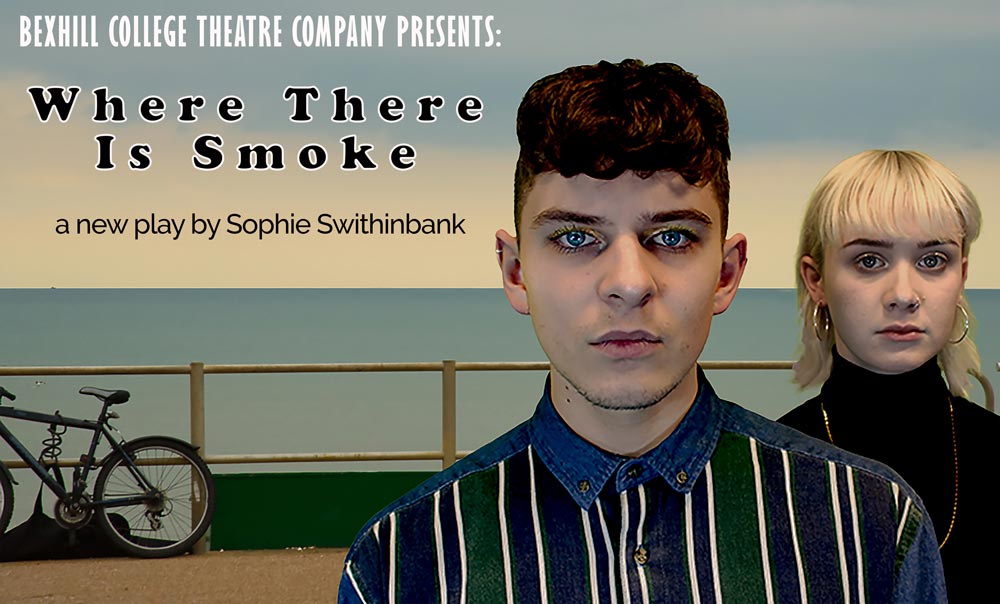 Where There Is Smoke

10 characters, one seaside town, a party on the beach…

Where There is Smoke invites us to join a group of young people as they struggle to define themselves in terms of gender and sexuality.

Can they break free from long held ideas about what being a bloke or a girl should look and feel like? What does it take to escape from themselves whilst stopping the seagulls nicking their lunch?

And then there is the small matter of what the hell they are going to do with the rest of their lives?

How Where There Is Smoke Came About

‘Where There is Smoke’ is the next step in a project with was originally conceived in 2017/18. This was a performance project with our students focusing on issues around gender identity. 10 of our students worked with a group of secondary students over a period of 6 months to explore ideas. ‘Where There is Smoke’ emerged as a natural progression to this where 10 auditioned 6th form acting students have formed an ensemble to create a more far-reaching play which addresses more challenging material surrounding gender and sexuality in all its forms. The original project came out of the £10k funding from the NHS health inequalities fund focused on Sidley and central Bexhill. The project focused on transition, between school stages, in identity and through life stages. Involvement in the Arts are identified as a key element in extending life choices. This year’s development of the play into a fully formed professional work has been funded by the Arts Council of England.

Sophie is an established young playwright and has many contacts in the industry, she will join us in liaising with venues in order to establish areas for her work to be premiered. Sophie’s first play The Superhero became a success in a number of venues, most recently the Lyric Hammersmith. Sophie’s work has been accepted into a number of starch nights, most recently Playtime, at The Bunker Theatre, at which her short play Biology Lessonwas performed. Sophie is a member of the Soho Writer’s lab, a nine month writing programme. Her new play Come Inside, which is set inside the female body and follows the journey of pregnancy, has been produced at The Bush Theatre, and is being developed with GLYPT. Sophie teaches creative writing at Chelsea Young Writers. Sophie’s style includes abstract elements and ensemble work which suit the style of work that the students do well in. In her own words “I enjoy writing anthropomorphism and the personification of things that don’t usually speak, for example, mammoths, or sperm”. Sophie works with a dramaturge and is at the beginning of her writing career.

Sophie won the Soho Theatre ‘Tony Craze’ award for he play Bacon at the end of 2017.