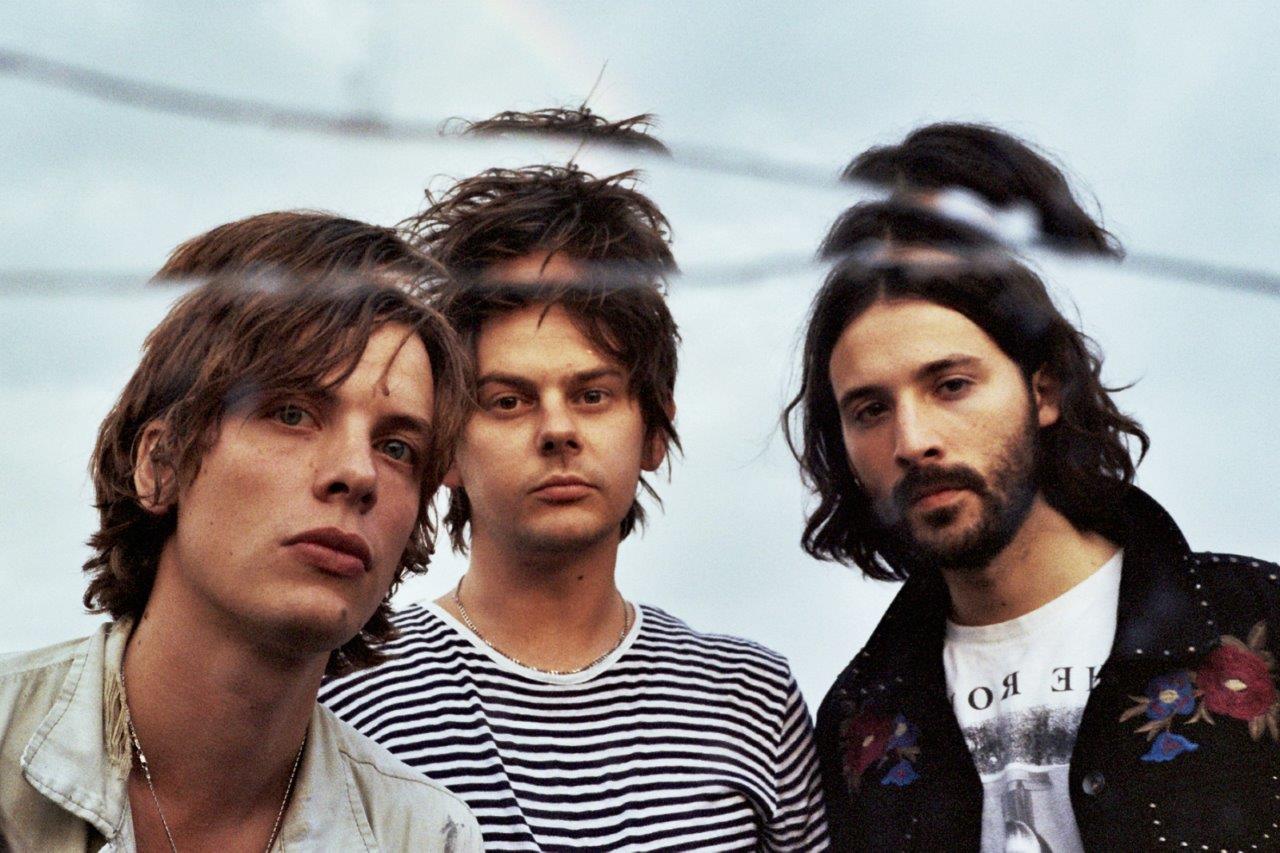 We're delighted to announce that YAK are coming to Music's Not Dead at the The De La Warr Pavilion for a special instore for the launch of their new album The Pursuit Of Momentary Happiness.

The event is free but to guarantee an entry you need to
pre-order the new album – Pursuit of Momentary Happiness – from Music’s Not Dead, either in store or by telephone 01424 229123 .

Few albums in rock ‘n’ roll history have seen its creator’s obsession veer so close to self-destruction, as Yak’s The Pursuit Of Momentary Happiness. For singer, guitarist and driving force Oli Burslem, making his band’s second album became about pursuing his artistic vision at the expense of all else, including his own financial security, and mental health. Who else these days invests every single penny available to them into recording, to the point where they become homeless, and have to sleep in the back of a Citroën estate?

Listening to The Pursuit Of Momentary Happiness, you frequently feel the white-knuckle monomania of Yak’s mission. It’s one of those once-in-a-decade records, whose sheer sense of belief and commitment pulsates through every nanosecond of boundary-breaking sound – like Spiritualized’s Ladies And Gentlemen We Are Floating In Space, and Tame Impala’s Innerspeaker, both of whose creators had a part to play in its genesis.

“I don’t want it to be a boo-hoo story,” says Burslem, of the record’s tortuous gestation. “It was fun doing it. It’s nice to push yourself to the limit, and I can say now that I don’t give a shit what anyone thinks, because it’s a document of that time, and it’s honest and open, and I couldn’t have done or given much more, which is a great feeling.”

The story began after Yak had completed a debut campaign which itself had played out like a dream. After getting snapped up by Rough Trade management, and cutting one of several feral early EP’s for Jack White’s Third Man Records, the trio of Burslem, bassist Andy Jones (Oli’s childhood friend from Wolverhampton), and drummer Elliot Rawson, set an all-but-moribund UK alt-rock scene alight with 2016’s inaugural long-player, Alas Salvation, but for Oli, that year’s final career-high show at London’s Scala felt like an endgame, rather than an achievement to build upon.

“Andy and I had been friends since we were three years old,” he says, “and he was always gonna get married and move away at some point. We didn’t particularly think the band had a future, but then it took off, and it was ace, and after the Scala, there was an opportunity, and some money, to do another record, and I really wanted to give it a go.”
Jones, indeed, soon upped sticks for Melbourne, but after a chance meeting in a pub in Dalston with Jay Watson from Tame Impala’s touring band, Burslem hatched a hare-brained scheme for the band to convene in Melbourne to rehearse together for ten days, then move across Australia to lay down Album Two, on Watson’s invitation, at Tame mainman Kevin Parker’s place in Perth. “I thought recording would take ten days,” says Oli, sheepishly, “but it didn’t quite work out that way.”

Things started going off the rails before Burslem and Rawson even got to Aus, as Oli decided to go to Tokyo for a month beforehand – “you know, for the isolation, to do all the writing”. Perhaps predictably, the first two or three weeks went by in a drunken blur with nary a note written. Landing ragged in Australia though, things got worse.
“It had become pretty apparent that the three of us in a room bashing chords out, wasn’t really turning me on,” shrugs Oli. “That was just going to sound like the first record. It was an eye-opener, like, what the fuck are we going to?”

On the plane back, Burslem ate and drank to excess, knowing that when he touched down, he had no money, no home, and, worryingly, no album. On arrival, he reduced his possessions down to two hold-alls, and “moved into” his old Citroën, which had no MOT. “It wasn’t ideal,” he admits.
That was February 2017, and he says he has only the sketchiest memories of the ensuing 18 months. Some of the time, fellow musicians would let him crash at their place, like Martin Slattery, once of Joe Strummer’s Mescaleros, and Spiritualized guitarist John Coxon.

On the plus side, after blagging into Glastonbury, he found a new bassist in Vinny Davies. They partied for two days straight, then back in London rehearsed together with Rawson for a few weeks, and “things started to get more focussed.” They booked a cheap demo studio, and in the pub with Coxon a few days beforehand, Burslem got chatting to Spiritualized chief Jason Pierce.
“He was like, how’s your record? And I was like, it’s non-existent. I told him we were demoing around the corner, and he was like, Oh, I’d love to come and help you out. I was like, Okay! Thinking he wasn’t going to turn up.”

On day two, Pierce materialized, and had them rattle through all the band’s songs. “He was really supportive. I’d been thinking, no-one will like this, but he was like, No, you’ve got something good here – you should try and record them properly.” At one point, Burslem was casting around for small change for a tube fare, and seeing Oli’s woeful circumstances, Pierce urged him to get a record deal, and Yak duly landed up with mighty Virgin-EMI.
Says Oli, “Then it became, Right, I can’t fuck this up now. I could’ve tried to house myself, but instead we put it all into recording, and getting a brass section. Then afterwards, I can sort my personal situation out.” He shrugs. “I probably took on a bit too much.”

Another chance meeting at a party brought Burslem together with Marta Salogni, an Italian producer now based in the UK, best known for her mix on Björk’s sonically adventurous Utopia album. Says Oli, “We met a few times, and talked about making a guitar record that wasn’t boring, and didn’t sound like UK indie rubbish. But we still wanted to capture a live element, and in my head, RAK is the best studio in London to do that, so it was, Let’s just do ten days there, and get some really good performances of us three playing together.”

In those ten days, Yak recorded some 29 songs, of which 11 ended up on the record. “The songs that went on are the ones I thought fitted together as a consistent story. Doing the writing, I couldn’t see further than the next day or two, so all the joyous and happier things were momentary, whether it be going out, getting drunk, whatever – no plan of any longevity, so all the songs have that destructive bent. They’re on the edge.”
Opener ‘Bellyache’, with its Tame Impala-esque wah-wah stomp, Oli describes as “angry and fuck-you”, the ensuing ‘Fried’ as simply “I’m fucked”, and the titular third track as “the comedown, like, what’s this all about?” The latter was apparently written, after staying up all night. He describes it as “blunt and to the point”. The song also acquired twinkling celeste, which launches it into the heavens. ‘Bellyache’, meanwhile, boasts crazy flute, and one of a handful of portentous brass arrangements.
After the RAK sessions, Burslem withdrew to a small home studio with Pierce to apply some different vocals, and piece the album together. Pierce also added slide guitar and his own vocals to dazed finale, ‘This House Has No Living Room’, which sails out on Oli’s own field recording of birdsong. The complexity of all the layering in that track led to Burslem’s belief that the album needed a full-scale remix. Everyone involved was advising him to quit while he was ahead, but he flew to New York to mix it. “I just wanted a record with depth, as a piece of audio,” he says, “where you’ll still be finding new bits in 20 years’ time”.
Job done, Burslem’s existential status quo was such that he duly got smashed with a fellow homeless person, and, doing a runner from his hotel, jetted home, pockets totally empty.
A few weeks further on, he says he’s happy the album is now done, but those who’ve read this far may be worried about Oli’s welfare. Has he now, as intended, ‘sorted out his personal situation’, and re-entered normal society? “That’d be nice,” he smirks, a tad unrepentantly. Does he at least have a roof over his head? “Only for two weeks. I got told yesterday, I’ve got to move out of my current place.” He shrugs. “I’ll find somewhere…”
Roll on, that victory lap on the road…

From £6Sold out
Music’s Not Dead presents