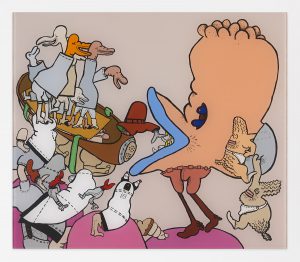 The De La Warr Pavilion’s 2019 exhibition programme begins on February 9 with Still I Rise: Feminisms, Gender, Resistance, Act 2. Over 50 artists, designers, architects and archives are brought together in conversation across time and space to consider resistance from a gender perspective, spanning the 19th century to the present and beyond. Co-curated with Nottingham Contemporary where Act 1 opened last year, the exhibition is recalibrated for Act 2 to focus on architecture, design and the politics of space.

The De La Warr Pavilion is the lead partner in OUTLANDS, the new national touring experimental music network; it will present a new commission, Ecstatic Material, by Keith Harrison and Beatrice Dillon on February 15.
Visit OUTLANDS Network for information.

Our summer programme celebrates and interrogates the legacies of the Bauhaus in our First Floor Gallery. Events, workshops, performances and conversations will explore Bauhaus methodologies of “thinking through making,” and how these might continue to be useful. The programme is underpinned by a new commission by Lauren Godfrey, whose sculptures often take the form of domestic scaled objects, quasi-furniture and the almost-useful. In partnership with UCL.

The autumn season begins on September 28 with a major new commission by Mikhail Karikis. It emerges from a year-long residency at Project Art Works, working with people who have complex support needs. Continuing his ongoing enquiry into social and political agency and the power of nonverbal communication, Karikis’ commission will respond to Project Art Works’ charter of rights for those with complex needs. Part of Project Art Works’ Explorers 2019 co-commission programme.

Occupying the First Floor Gallery will be an exhibition of new ceramic and tapestry works by Renee So, created during a residency at West Dean College of Arts and Conservation organised as an open call celebrating the 100th anniversary of the Bauhaus. So’s work often contains fictional personas, borrowed from ancient ritual masks, military and aristocratic portraiture. During her residency she will be paying particular attention to women of the Bauhaus.

Our exhibitions are accompanied by Learning and Participation activities for all ages. See the latest exhibition events, talks and workshops on our What’s On page.