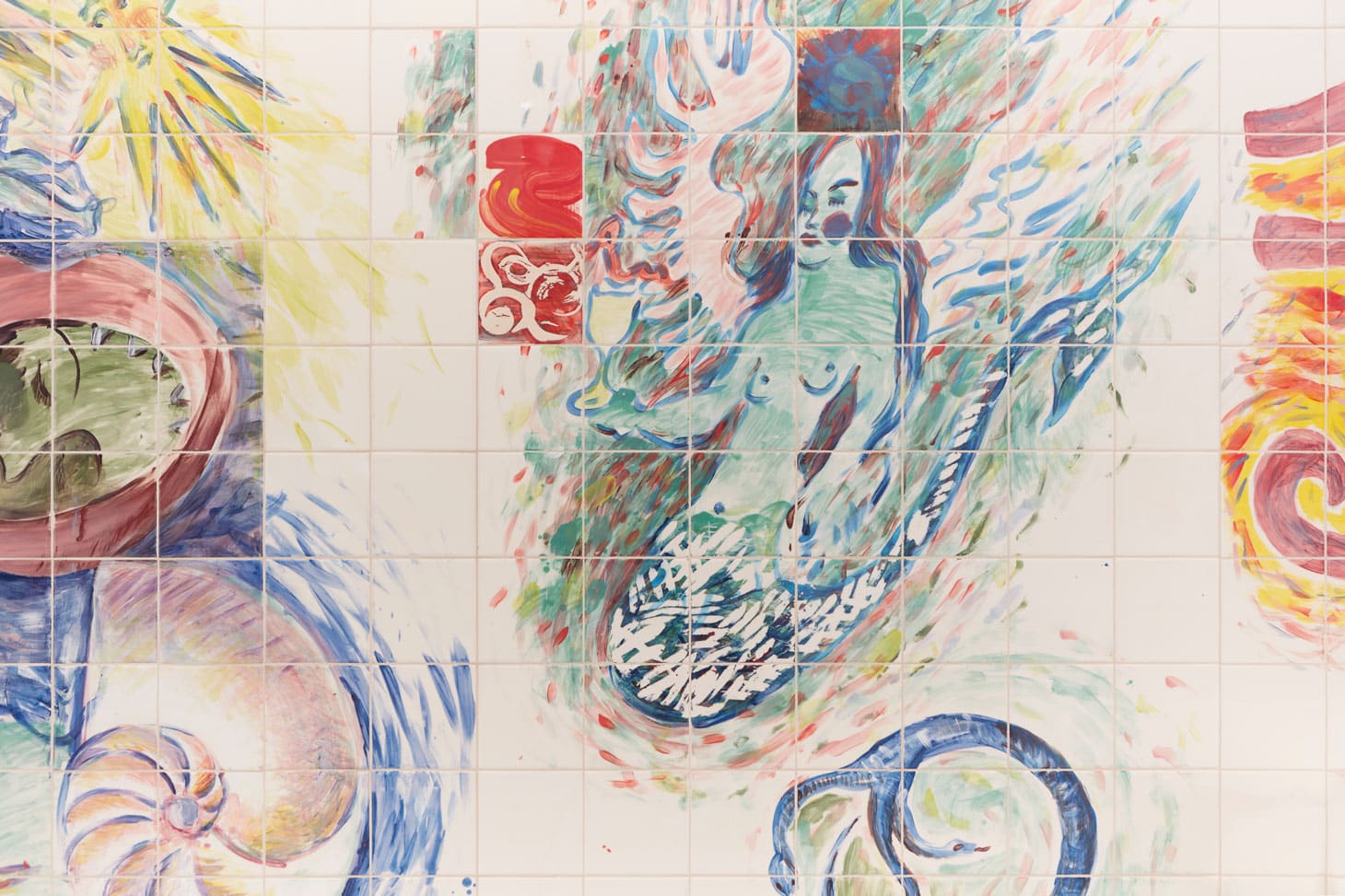 Obsessive, unashamedly emotional and loaded with a strong psychological charge, Stein’s work incorporates a heady mixture of styles and references. Weaving together personal experiences with feminist and psychoanalytic theory, mythology and religion, her drawings, paintings and installations draw upon the concept of the ‘female gaze’ to question the representation of women in art history. Since moving to St Just, Cornwall in 2015, Stein has become deeply involved in the history and folkloric traditions of the Cornish landscape.

The exhibition is inspired by the fougou: narrow Neolithic underground passages unique to West Cornwall that lead to womb-like chambers and have become sacred sites of worship. Echoing the ritual rebirthing ceremonies that are believed to have taken place within these uterine caverns, the exhibition centres around an installation comprising a bathtub and sink with running taps, surrounded by tiled walls that have been hand-painted with scenes relating to the artist’s study of western esoteric traditions.

Surrounding this central installation is a series of new paintings and drawings made during Stein’s second pregnancy and throughout the Covid-19 pandemic, which reflect on a period of intensive domestic caregiving and anxiety. They combine Greek mythology, esoteric culture, and ecclesiastical and medieval imagery with vibrant tableaus that depict a wide range of western female archetypes. Through these works Stein brings in the notion of the numinous – a religious or spiritual quality – in an attempt to describe the real, the symbolic and the imaginary.

Stein has responded to the modernist history and coastal setting of De La Warr Pavilion to evoke the genius loci or spirit of this meeting point between land and water. The figures represented in each work face out to the sea through the windows, catching upon their tiled and painted surfaces the subtle shifts in light and shadow as the sun moves across the horizon, eclipsed by the monumental form of Beachy Head in the distance. A new tile-based work, made especially for De La Warr Pavilion, depicts the Greek goddess Persephone, queen of the underworld and goddess of springtime, who also gazes outwards. Her presence within the exhibition alludes to the original design of the Pavilion, which included a 26ft high sculpture of Persephone by artist Frank Dobson that was intended to stand in front of the building, a fold of cloth in hand as if preparing to enter the sea. Incomplete and lost when WWII broke out, Stein conjures and reconstructs the memory of Dobson’s sculpture in the present.

Loaded with wittiness and humour, the works in Wet Room challenge the different clichés and stereotypes that have shaped the interpretations of esoteric culture and the female psyche for decades.

Lucy Stein: Wet Room is commissioned and produced by Spike Island in Bristol, where it is on display from 25 September 2021 to 16 January 2022.

Lucy Stein has been based in St. Just, Cornwall since 2015. She studied at The Glasgow School of Art, and later at De Ateliers in Amsterdam. Recent solo exhibitions include Thesmophoria (including the performance lecture Bride of Quiet) Galerie Gregor Staiger Milan (2020); Digitalis Purpurea (a re-introspective), Conceptual Fine Arts, Milan (online) (2020), £10.66, Palette Terre, Paris (2018); Crying the Neck, NICC Brussels (with Nina Royle) (2017); On Celticity (organised with Paola Clerico), Rodeo Gallery, London (2016). Her work has been included in group exhibitions at Futura, Prague (2020); Bonington Gallery, Nottingham (2019); Tate St Ives (2018); TULCA festival, Galway; Newlyn Gallery, Penzance (all 2017); Le Bourgeoise, London (2016); UKS Oslo (2015). In 2017 she co-organised Fuck you wheres my Suger, a two-day festival celebrating depression and hysteria at Cafe Oto in London with Mark Harwood. In 2016 she co-curated NEO-PAGAN BITCH-WITCH! at Evelyn Yard, London with France-Lise McGurn and in 2015 she organised the performance event The Wise Wound with Tate St Ives and Porthmeor studios.

SHARIF PERSAUD: HAVE YOU EVER HAD

A Map of the Sea and the De La Warr Pavilion

We use cookies to ensure that we give you the best experience on our website. If you continue to use this site we will assume that you are happy with it.Ok