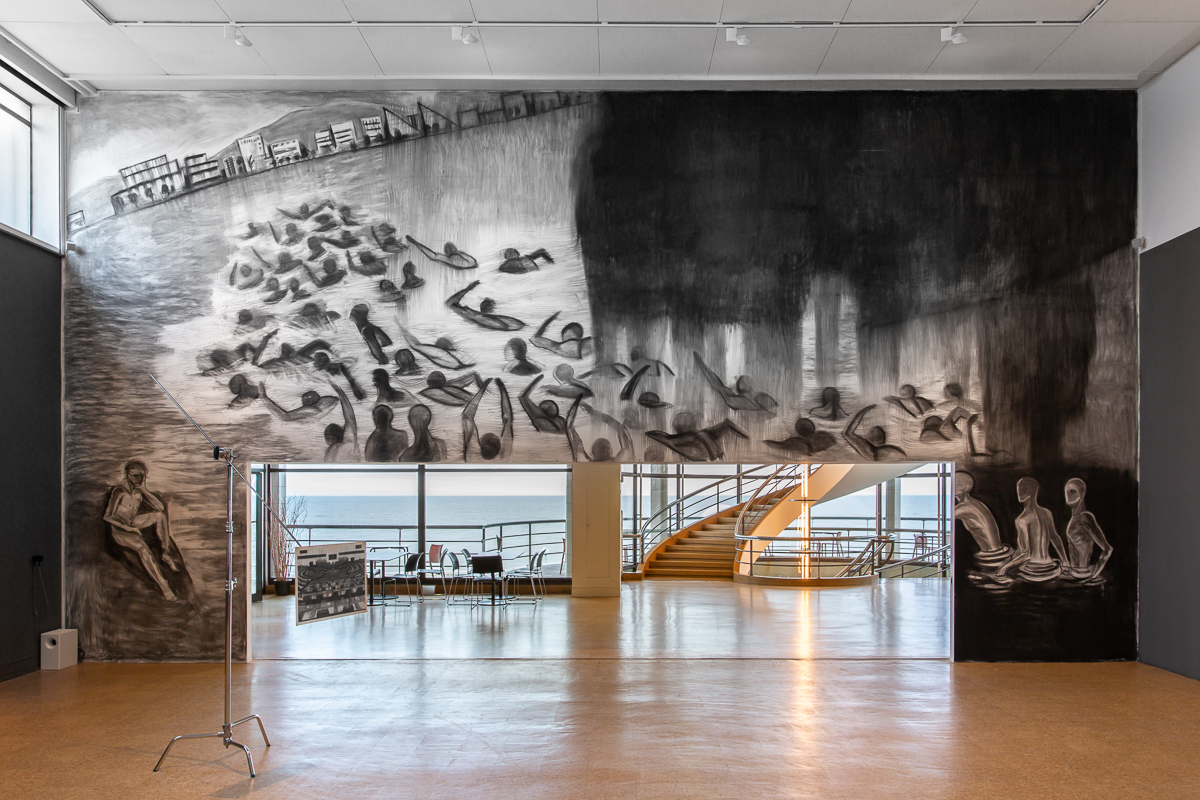 Canan Batur: Marc, how did this new body of work come about? And how did you choose the subjects for your drawings?

Marc Bauer: In the Summer of 2018, I was reading the news and found myself faced with an image of Aquarius published in Le Parisien, a French newspaper. I immediately wondered why I did not feel a more empathetic response when confronted with such a dramatic image. I thought: is there something in this image that excludes me? How can I relate to it?

I wondered whether, by re-drawing this image, I might understand something about it, comprehend it better. So, I did a large drawing of it, and during this process, I started to think about other images of people on boats and I decided to make a kind of an index of this topic. I wasn’t sure how this would develop beyond simply seeing where the Aquarius image would take me, but eventually that process spurred me on, and I began to think: there really is something to understand here, something to investigate more deeply.

Going through these different images of people on boats, I was shocked to find out how often these people were part of stigmatised groups: prisoners, mad people, slaves, criminals, people in total desperation. The images of them mostly function in the same way: representing an undefined group of people, with no other element in the images to personalise them, to individualise them.

This type of image has been circulating massively in the news and in social media over recent years, and because of that over exposure it has been difficult to see it again. We have the feeling we understand these images and we are able to read them for what they are, but I had the feeling that these images were bringing back something deeper in me, something that I internalised unconsciously.

CB: You seem to exhaust these images through meticulous drawing. Could you talk a bit more about your process and experience of making these works?

MB: Drawing is a very slow process, and when a drawing is finished it seems to encapsulate and transmit durational time. I think this makes the viewer slow down, psychically, when they look at one. Also, when an image is drawn, every element that we see is made consciously: it is a very different process to photography, which condenses reality by framing it – the photographer needs just to extract visual ideas from what they see. In drawing it is the opposite, you have a blank space, a sheet of paper, and something has to emerge, has to be formed. Drawing is a way to understand and know something intimately. If you draw something you have to see every small part of it.

CB: Rossana, you have been working very closely with the issues and outcomes surrounding this so-called ‘migrant crisis’ through Hastings and Rother Refugee Buddy Project. Could you tell us about the initial inspiration to start such a project, and also reflect on the local context, the needs and challenges you face?

Rossana Leal : I set up the Buddy Project so that newly arriving refugee families could experience a similar welcome to the one I received as a nine year old child in the late 1970s, when my family and I fled Chile ending up in Cowdenbeath, Fife, Scotland. We were welcomed and made to feel safe by the National Union of Scottish Miners.

My aim with the Project was to enable friendships, solidarity and empathy for people seeking refuge. At first, I was a little apprehensive about whether people would join, but now we have over 150 people signed up. We have recently moved into a space on the seafront where newly arriving people seeking refuge, explore new skills, socialise and show off their expertise. People are learning new languages, sharing food, and building new friendships.

But this is all happening against the backdrop of a government policy called ‘the hostile environment’ – a set of administrative and legislative measures that deliberately makes it difficult for people to seek refuge and settle in the UK. One result is the indefinite detention of people – often in outrageous conditions – whilst their visa applications are being processed. When did it become a crime to seek refuge and safety?

In this current climate of hostility, it has become all the more urgent for grassroots community-based organisations such as ours to offer an alternative narrative to that of the mainstream media. Every day we witness the way that mainstream media outlets deliberately dehumanise people seeking refuge, filling our tabloids, newspapers and televisions with the use of derogatory concepts like ‘migrant crisis’, ‘illegal migrants’, ‘good’ and ‘bad’ refugees. Right wing politicians fuel this narrative with populist discourse blaming the most vulnerable for the failures of economic models that favour the rich.

The ‘problem’ is not the displaced people. The problems are the wars, the violence that forces people to leave everything they know and cherish behind to find safety and refuge elsewhere, the decisions made by politicians who do not look after our planet and who value profit over safety. The problem is how this lack of care for our planet – resulting in climate change – has forced people to seek safety in other lands. Just look at the images of Australians having to get on boats to reach safety from the fires.

It is important to offer a narrative that does not dehumanise people, to work with those affected to ensure they are able to tell their stories, in their own words. How can anyone witness what is happening to people seeing refuge and not be moved to action?

CB: Both of you draw links with memory and language, highlighting how powerful it is to reveal universalising histories. The Mediterranean Sea is an important symbol in many popular narratives around migration. Could you both share your reflections on the Mediterranean Sea in the past, present and future?

MB: The Mediterranean sea has been an incredible route of communication between different civilisations and cultures. It is also a path that has brought invaders and enemies at times of war. In their political speeches, populist parties all over Europe trigger something that is very deep and almost unconscious in ourselves; I think that instead, we need politicians who lead us and speak to our intellect instead of instrumentalising our unconscious fears. When I was a kid the Mediterranean sea was the postcard picture of the summer holiday and today it has become a graveyard, where some of the most vulnerable people perish. We should build a common history instead of living on parallel narratives: us against them. I think that if we were able to see the Mediterranean Sea not as a frontier but as a common sea, it will develop very different possibilities for humanity.

RL: For me, the Mediterranean sea conjures up the images of heroes risking their lives to protect their families, of those offering vessels up to help people to safety. But it is also a militarised place occupied by those who persecute people for daring to seek refuge. It can be a place of fear, lawlessness and anarchy.

Part of my work is about reaching out to the people who are being influenced by the dehumanising effects of the media. I think it is vital to try and win these people over by offering a different narrative that engenders empathy rather than hate and fear. Enabling these friendships through the Buddy Project is one way to do it; challenging cultural stereotypes is another.

But most crucially, it is important to explore the concept of refuge as a universal concept. There is no doubt in my mind that all of us have had to seek refuge for one reason or another, at some point in our lives. Whether you have plucked up the courage to escape a violent relationship, whether you have suffered a nervous breakdown, or just needed to a safe to recover from an illness. If you have ever felt anything like this, you will surely have empathy and understanding for some else feeling this. And this is where the conversation starts.

CB: One thing that Marc is intrigued by is how images can become a kind of testimony. There is a certain way that images of mass atrocity are circulated – everyone probably remembers the image of young boy washed ashore. But does atrocity need a body to show? And how one can disturb this representation?

MB: I think that the image you mention had such an impact because suddenly it was a different type of image. It was not a group anymore, suddenly this violence had a body, and it was just a kid. Europe had to face the reality, there was no possibility of denial or excuses anymore. Before this picture, there was a picture of a boat, and sometimes, the rescue of the boat, but the dead had disappeared in the bottom of the sea: those bodies were invisible. In this image the body is a boy, he has a name, Aylan Kurdi. He is someone’s son. He also represents the victims taken in this tragedy, there is no way to get out of it.

RL: This is really a question about objectification. How can someone stand by and make an image of suffering instead of take action to help? For me, there is a role for everyone in telling the truth. ‘Action’ is the process of drawing, in using the skills you have to tell the story in the best way you can. There is no doubt in my mind that the image of Aylan Kurdi in 2015 triggered many British people into action, gave them the desire to help people seeking refuge. I was personally touched too. People began to ask bigger questions. It is crucial for us to join the dots between so-called international and local issues. Whether it’s the bombing of innocent people in Northern Syria, the fighting against global climate change, the current uprisings in Latin America, or refugees fleeing the Calais camps to our shores here in Hastings, we are all connected and we have to find ways of telling our stories and fighting back against the same injustices right across the globe.

The Hastings & Rother Refugee Buddy Project was founded in autumn 2017.  Local people are matched with newly arriving refugee families to the Hastings, Bexhill and Wealden areas. The founder, Rossana Leal, has a vision for how this can work to establish a real culture of welcome and hospitality towards our new fellow-citizens from her own experience many years ago. Read here for more information on the Buddy Project.