#IWD2021 The story behind Stitch for Change 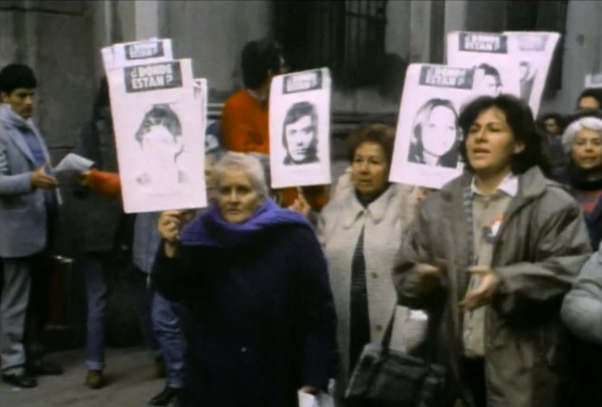 On International Women’s Day, we celebrate the bravery and determination of the women of Chile whose menfolk were detained/disappeared under the Pinochet regime.

By coming together in stitching workshops, the women recorded the crimes of the dictatorship, and the resulting arpilleras became an archive of a history that the government tried to suppress. The women found strength and solidarity through the arpillera-making and became activists, finding courage together in their quest to discover what happened to their loved ones.

Rossana Leal of the Refugee Buddy Project Hastings, Rother and Wealden, Jimena Pardo and Janey Moffat from Stitch For Change continue this work, with the storytelling element of the arpillera craft as the tool to tell stories and come together under lockdown.

Telling our own stories is a fundamental part of the work of the Refugee Buddy Project. This can often be a very difficult thing to do because we are not often given the chance to tell our stories. When we do, as a refugees, our stories are questioned often challenged and hung out to dry by the hostile environment which puts into question and makes public everything about our lives. For this reason, the storytelling element of the arpillera craft seemed so right, as the tool we needed to both tell our stories and come together under lockdown. The Stitch for Change sessions gave us a chance to think about what we were experiencing, what we wanted to say, how we wanted to say it and how we wanted to present it. We would show each other our finished pieces and talk about what we had made. We connected, we cried, we talked and we looked after each other. Most importantly, we told our stories of lockdown 2020, the way we wanted to.

During the Stitch for Change project, the main connections I wanted to explore were around the Chilean arpilleras being a form of solidarity. Growing up as a Chilean refugee, I came into contact with Arpilleras that arrived from Chile to be sold in the UK as solidarity art. The context of the dictatorship within which the arpilleras were made in the 70s and 80s has now shifted and around the world, arpilleras are made as a way of remembering events as well as a textile testimony. In Stitch for Change, we wanted to make a record of the pandemic, the fear, loss, uncertainty, and also the kindness that has been shown during this lockdown. Covid 19 has no borders and across many continents, we have seen the stark inequalities laid bare because of it. The arpilleras aesthetic and symbolism holds that ability to speak of terrible things but in a way that also speaks of the humanity and hope within us and that is why I relate so strongly with them.

March 2020 felt like no other month in time; a whirlwind of chaotic emotions, fears and uncertainty as the world faced the Covid 19 Pandemic and went into lockdown.

It felt appropriate to respond to the situation by being flexible, available, nurturing, containing; hence our decision to carry Stitch For Change forward during this challenging time using the tools that were available to us.  We instinctively felt that participants would need the project more than ever as a way to rest and unravel in a safe space.  It felt like a mature reaction and I felt proud of our joint decisions as co-facilitators after the sessions had been carried out.

I learned a lot about the subtlety of important change and growth in individuals and the necessity of examining projects qualitatively rather than quantitatively.  I had a tendency to focus on the latter in the past, feeling the need for numbers and results in order to prove the validity of my work.  I’ve had a deep shift in my awareness that it’s unethical to view a human being only as a number or statistic – and this type of number crunching is a skewed way of evaluating work amongst humans.

The project has helped me to feel deeply connected to others who use stitch to mark any of the wide expanse of human emotion and experience – from the people who made Arpilleras to those who have stitched in psychiatric hospitals and prisons.  It has given me a sense of my place in history, and the feeling that I stand in one tiny spot of a vast network of time.

Read more about the exhibitions All In The Same Storm: Pandemic Patchwork Stories using the button below.

Posted by Laura Sayers on Monday 8 March 2021
All In The Same Storm: Pandemic Patchwork Stories Home