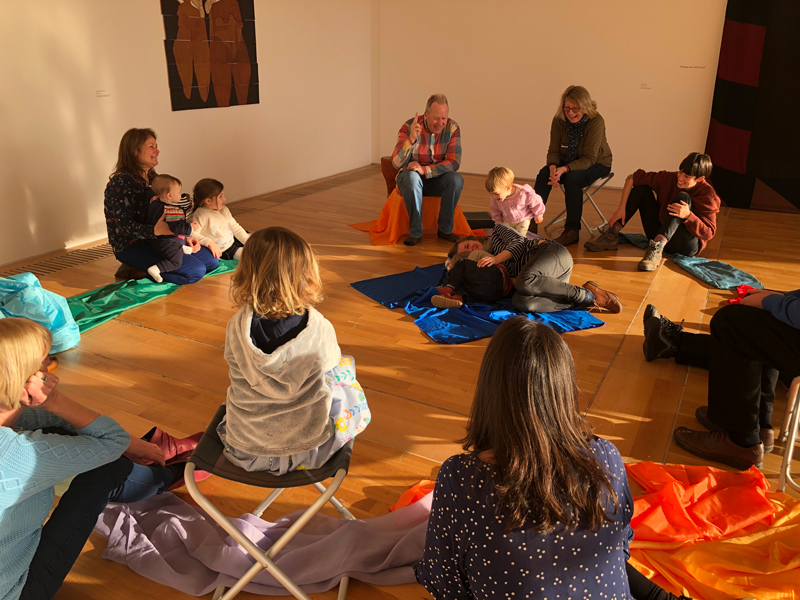 The idea of transforming one thing into an imaginary other thing – the essence of ‘let’s pretend’ – is central to the play-world of very young children. In this month’s Play Circle we played with the idea of transformation as embodied in artist Renee So’s textile and ceramic works, and in particular Woven Past (2019) – her wall-hanging made out of recycled woollen jumpers.

First we played with a range of brightly coloured fabrics – turning them into imaginary coats, jackets, scarves, shawls and hats. Then a rectangular piece of cloth became a bed and we played a sleeping/waking game in which ‘the sleeper’ is woken – over and over again – when everybody calls out, ‘Wake up!’ (‘Again’ is one of the first words most children learn to say. Their thirst for repetition is insatiable!) After this I told The Tailor’s Tale – a shaggy dog-type folktale about a tailor who made a coat which eventually wore out so he turned it into a jacket. And then a waistcoat. And then a hat. And then a bow-tie. And then a button. In the end, even the button wore out so the tailor turned it into … a TALE – the tale that’s just been told! What appealed to the children was not the witty story-ending – its punchline was pitched at the adults present – but the rhythmic and interactive cutting, stitching, sewing and weaving as the tailor transformed each item of clothing. These essential elements of the child’s play-world – transformation, repetition, rhythm, interaction – are at the heart of a child’s cognitive and emotional development. And they are at the heart of Play Circle too.

Play Circle takes place on the 2nd Monday of every month with a session at 10.15am for members of the general public

Book your spot at an upcoming Play Circle session by clicking here.

Sessions will be facilitated either by storyteller Kevin Graal or dance artist Anne Colvin together with experienced DLWP volunteers.