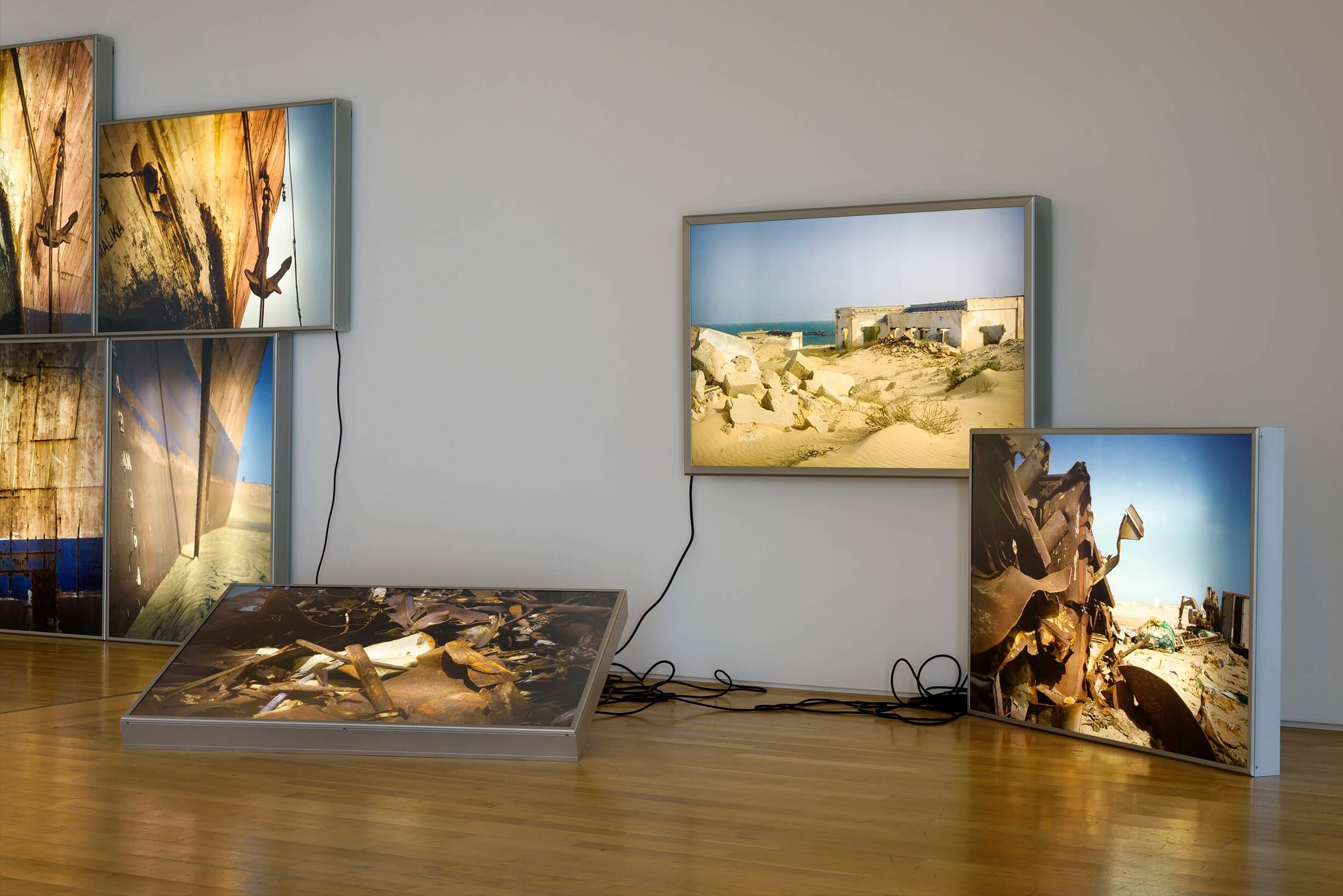 My name is Rachel Marsh, I’m a Gallery Assistant here at the De La Warr Pavilion, and I write fiction and poetry. I enjoy writing poems inspired by the exhibitions here, and I have written one inspired by my favourite artwork in the Zineb Sedira exhibition, which is the lightboxes. This piece is called Shattered Carcasses and Architecture of the Forsaken, and these photographs were taken in Nouadhibou, Mauritania.

I love this piece because the photographs are beautiful, and on a gloomy day or when it gets dark, they really glow and stand out in the gallery. The lightboxes echo the shape of the wrecks, and the wires on the floor look like the tangled ropes and nets we see in the photographs.

Yet even though the photographs are beautiful, they tell a sad story. Hundreds of boats have been left to rot here, and toxic chemicals seep from them into the sea, as well as the netting, which is disastrous for marine life. Yet even though this is a tragic situation, from the research I did there is a glimmer of hope because it has provided jobs in salvaging and nature is good at recovering so actually there are new ecosystems, birds, and fish that have adapted or are adapting to this, so that ‘glimmer of hope’, I wanted to add that in my poem as well.

But there is another dark side to this place. Nouadhibou is a popular destination for migrants to leave because it’s become too difficult to travel from other countries in North Africa. Leaving Nouadhibou to try and reach the Canary Islands is an incredibly dangerous route to go.

The title of my poem is called Swallow the Poison, and this title has two meanings. Firstly, in the literal sense of the toxic waste produced by these shipwrecks, but it is also meant as a metaphor. It’s almost like something written in a fairytale, like the poisoned apple in Snow White. For example, migrants who are tempted by and fed this ‘poison’ by people-smuggling gangs who take their life savings and promise them a glittering future. They assure them that there is no or little danger in making these perilous journeys via the sea or hidden in the back of trucks. Of course, that isn’t the case all the time, but it can be, and we’ve seen enough examples in the news of where these kinds of tragic events have occurred.

My poem is written in couplets, but I wanted the top line to be consistently shorter than the lower line. This gives the poem a shape, so the couplets themselves take the form of boats, echoing the meaning and subject of the poem.

tastes the red rust and swallows the poison down.

A gold and blue cemetery, where hundreds of boats go to die.

Sunlight glitters across the waves.

The sea accepts the corpses to their watery graves.

The letters start to fade in the corroded remains.

Fraying ropes and shards of glass.

Yet a glimmer of hope in the graveyard cove.

But the boats now notice other people leave.

Preparing tiny crafts for a voyage across the open sea.

Unable to move from their shoreline graves,

they watch them depart, souls they are unable to save.

as families full of hopes and dreams make their escape.

Passing the ships in the graveyard town,

they smile, pay the money and swallow the poison down.

Listen to a reading of the poem from Rachel here: