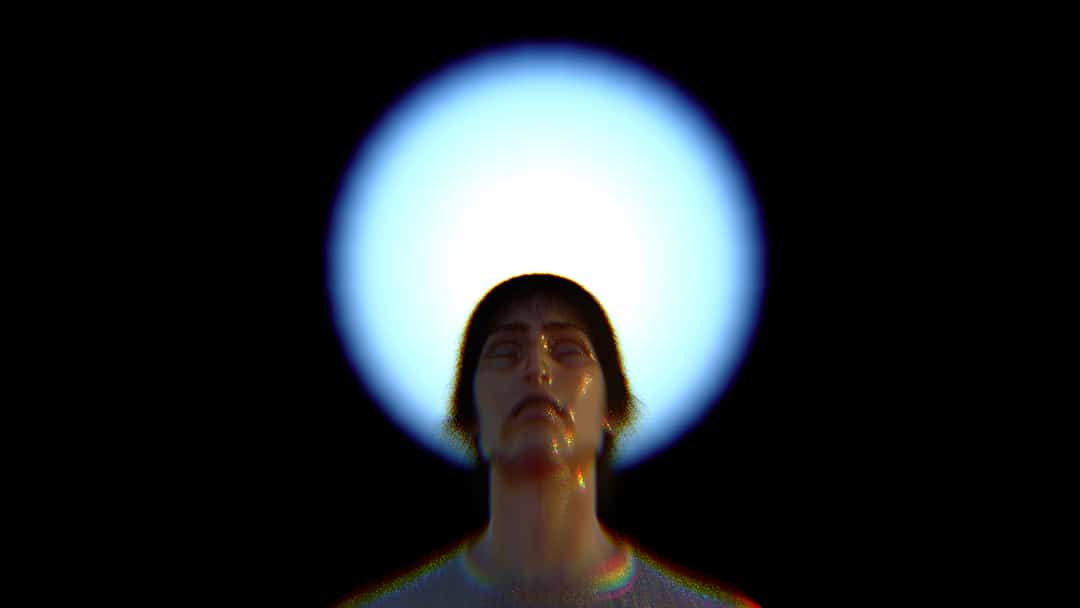 Bassam Al-Sabah, I AM ERROR, 2021. Video HD, 28 min. Film still. Commissioned by Gasworks, in partnership with De La Warr Pavilion, with the generous support of the Freelands Foundation.

Gasworks presents the first solo exhibition in London by Belfast-based artist Bassam Al-Sabah; I AM ERROR, from 21 July to 19 September 2021. His work embraces the shape-shifting potential of computer-animated worlds, creating fantasy dreamscapes in which personal mythology, historical trauma and queer possibility intersect. Al-Sabah’s exhibition centres on a new animation film displayed in an immersive environment, combining fantasy erotica and body horror to explore questions of identity and masculinity in action-adventure video games.

In previous works, Al-Sabah reflected on geographical dislocation through reference to Japanese anime cartoons broadcast throughout the Middle East during his childhood. Packed with imagery of warfare, anime cartoons and video game culture take on a heightened political significance within Al-Sabah’s practice, whose family was exiled from Baghdad after the Iraq War.

The exhibition at Gasworks explores the construction of masculinity in action-adventure video games. Presented in an immersive cinematic   environment, l-Sabah’s newly commissioned CGI films confront the armouring of the male body in gaming culture by queering its military ethos from within.

The centrepiece is a 28-minute-long animation projected on to a large curved screen. It features a collection of cinematic sequences from an imaginary game in which the hero’s body is constantly in flux, undergoing metamorphoses as a result of his encounter with other lifeforms, whose physical touch makes him vulnerable to change, threatening his identity and selfhood.

Combining fantasy erotica and body horror, Al-Sabah’s films celebrate the hero’s growth and transformation in all its literalness, as his body sprouts and blends into its surroundings, among writhing flowers and tentacular creatures. The tactile, hyperrealistic quality of the footage contrasts with the immersive architecture of the film installation, which engulfs the viewer to induce a sense of disembodiment.

The show is punctuated by digitally sculpted objects that explore the materiality of organic decay, extending the eerie atmosphere of Al-Sabah’s animations into the gallery space.

Bassam Al-Sabah’s exhibition is part of the Freelands Gasworks Partnership.

Al-Sabah is the fifth artist to take part in the Freelands Gasworks Partnership, a programme for emerging UK artists based outside of London. Made possible thanks to a generous grant from the Freelands Foundation, the programme combines a three-month residency with a solo exhibition, commissioned by Gasworks in partnership with the De La Warr, where a second instalment of the show will be presented in 2022.

For over twenty years Gasworks has played a unique role in the contemporary visual arts sector by working at the intersection between UK and international practices and debates. It does this by providing studios for London-based artists; commissioning emerging UK-based and international artists to present their first major exhibitions in London; and developing a highly-respected international residencies programme, mainly working with artists based outside Europe and North America. All programmes are accompanied by events and participatory workshops that engage local and international audiences with artists and their work.

Gasworks is also the hub of Triangle Network, an international network of small-scale arts organisations and projects that support and disseminate the work of emerging artists through artist-led workshops, residencies, exhibitions and outreach events. Gasworks and Triangle Network are registered as a charity in the UK under ‘Triangle Arts Trust’ and all their activities are free to the public.