Six Minutes To Midnight and me by Sally Ann Lycett 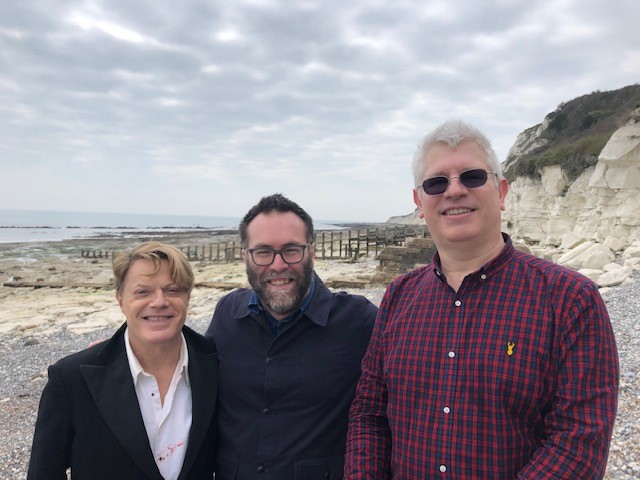 It was over five years ago when, during a post-show drink in the DLWP foyer, Eddie Izzard told us about the Augusta Victoria School in Dorset Road, less than a mile from the Pavilion.

During the 1930s the Augusta Victoria was a finishing school for the daughters and god-daughters of the German elite – in effect, the Nazi Party. Eddie had been shown the blazer badge from the school by Julian Porter, curator of Bexhill Museum. The badge has a British flag and a Nazi flag on it with the words Augusta Victoria College, Bexhill on Sea.  Struck by this, Eddie realised that a film should be made out of the story of the school and the girls.

Eddie is always ready to highlight interesting things that happen in Bexhill, spending 11 years of childhood in the town. Every time Eddie visited the Pavilion, we would hear more about the film’s progress. At some point along the way, we even had sight of a draft script. It was great to be on the fringes of the process of putting together a script, the money and the talent to create movie magic, even though we were sworn to secrecy.  It took a long time but, with Eddie’s legendary ambition and determination, we knew it would happen.

In autumn 2017 , Bexhill on Sea received a visit from a very special person – Dame Judi Dench. She and Eddie had met whilst working together on the film  Victoria and Abdul and Eddie brought her to the Pavilion for lunch, much to the astonishment of the regular DLWP Cafe customers. Judi loved the building and brought cards, books and souvenirs from the shop.  Having worked with many stars in my career (including Eddie, at the Edinburgh Fringe Festiva,l a very long time ago) I don’t usually ask for photos, but I couldn’t let this opportunity pass! 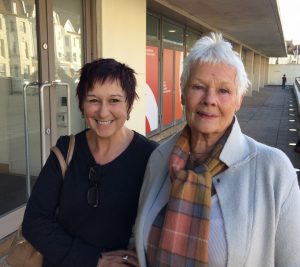 When Dame Judi said yes, we knew the film was a goer.  But would it be filmed in Bexhill?  Despite all Eddie’s best efforts, Six Minutes to Midnight was finally shot in beautiful locations in Wales, with road and bus signs incongruously saying “Pevensey” and “Bexhill”.  But, not one to give up, Eddie managed to get the final day of filming here in Sussex – on the beach under the cliffs in Eastbourne.  Stewart, myself and Julian Porter from the Museum were invited to watch.

A few weeks later a text arrived. It was a link to the trailer, and then to the film itself. It was a privilege to have this sneak peak of a major feature film in my own front room and to chat to Eddie afterwards. We were all very excited about the Pavilion being discussed as the venue for the UK premiere and dates were heavily pencilled in the diary.

But then the pandemic happened , and the film’s release and premiere were put on hold. A  year later, with cinemas still closed, it was finally released on Sky Cinema on 26 March 2021. We still had a premiere, with sky-trackers and a red carpet, and Eddie and a team from Sky broadcast a Q&A  streamed live from the Pavilion. We then showed the film – with no audience, of course.  Eddie has promoted Bexhill at every possible opportunity on TV, radio and in the papers.

From DLWP’s point of view, it is another aspect of that extraordinary decade in Bexhill’s history – the 1930’s.  As architect Erich Mendelsohn fled Germany for fear of his livelihood and his life, the daughters and god-daughters of his persecutors were being kept out of the way in sleepy Bexhill on Sea – the very town where he created, along with Serge Chermayeff and structural engineer Felix Samuely, the De La Warr Pavilion.

I wonder if they  knew about the Nazi school up the road? Or if the girls, when they inevitably visited, knew that they were in a building designed by Jewish emigres? I guess we’ll never know.

You can read more about the real Augusta Victoria School on this blog from Bexhill Museum here.